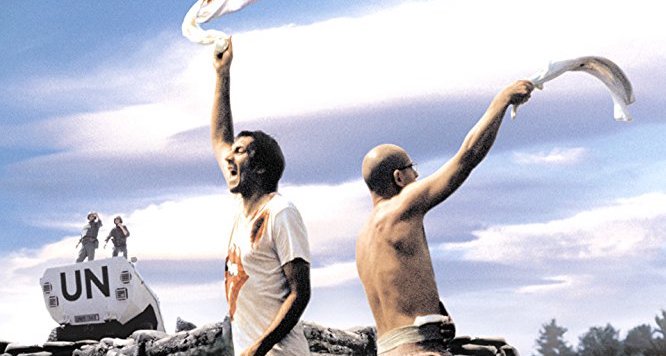 The first screening of the day is  Northern Skirts (Nordrand) by Barbara Albert (A-D-CH, 1999, col., 103’), at 14:00 at Teatro Miela. Austria 1995. Jasmin, Tamara, Valentin, Senas and Roman are five young people with different geographical and social background who meet in Vienna and share a small period of their lives and dreams. Premiered at Venice Film Festival 1999, where Nina Poll won the Marcello Mastroianni award for Best Young Actress. The movie was presented in competition at the XI edition of the Alpe Adria Cinema – Trieste Film Festival (2000).
Follows at 16:00 Fragments – Chronicle of a Vanishing (Krhotine – Kroniduka Jednog Nestajanja) by Zrinko Ogresta (HR, 1991, col., 101’). Ivan is a young man determined to discover what happened to his grandfather, who was arrested and later disappeared during Worl War II, and why the new communist government had labelled all his family as traitors. Premiered at the Pola Film Festival 1991 (only film screened that year because of war), the film was then presented during the third edition of Incontri internazionali di Alpe Adria Cinema (December 1991). The author will attend the screening.

Always at Teatro Miela at 17:00, the meeting Gender Migrations. A conversation with Mario Di Martino and Antonella Nicosia, president of the Arcigay Arcobaleno Trieste e Gorizia club, to discuss some projects that are taking place in Trieste with asylum seekers for reasons linked to gender identity. Meeting held in collaboration with M.I.T.,Bologna, Arcigay Arcobaleno Trieste Gorizia club and Festival Divergenti of Bologna.

The programme continues at 18:00 with ‘1989-2019: Wind of Change’ with The Powder Keg (Bure Baruta) by Goran Paskaljević (F-GR-MK-YU-TR, 1998, col., 102’): Belgrade, November 1995. The night of Dayton Agrement. Madness and violence are ravaging the city.  War is everywhere: in the streets, in homes. Violence sets men against each other, overwhelms the destiny of the individual weaving them in a tragicomic and absurd atmosphere. With a star-studded cast, Bure Baruta was premiered at the Venice Film Festival and in many other international festivals. Opening film of the 10th edition of the festival (1999).
Closing the day at 20:00, the screening of No Man’s Land by Danis Tanović (F-BIH-I-B-GB-SLO, 2001, col., 98’). Bosnia and Herzegovina, 1993. When the fights become more and more harsh, two soldiers of the opposite sides, Nino and Ciki, remain trapped in no man’s land, while a third soldier becomes a sort of living booby trap. Shot in Slovenia, No Man’s Land received the prize for Best Screenplay at Cannes in 2001, the Golden Globe for Best Foreign Language Film in 2002 and the Oscar© for Best Foreign Language Film in 2002.
From 22:00 to 3:30, special marathon – event Success (Uspjeh) by Danis Tanović (HR, 2019, col., 6×60’). The series follows a sequence of events of four people with different backgrounds who don’t know each other but end up being entangled to one another because of a violent event. Since they all risk to pay the consequences of this event, the four decide to regain control over their lives. Uspjeh is the first European HBO series in the adriatic region: a film in six episodes, set in today’s Zagreb, directed by the Oscar winner Danis Tanović, created and written by Marjan Alčevski.