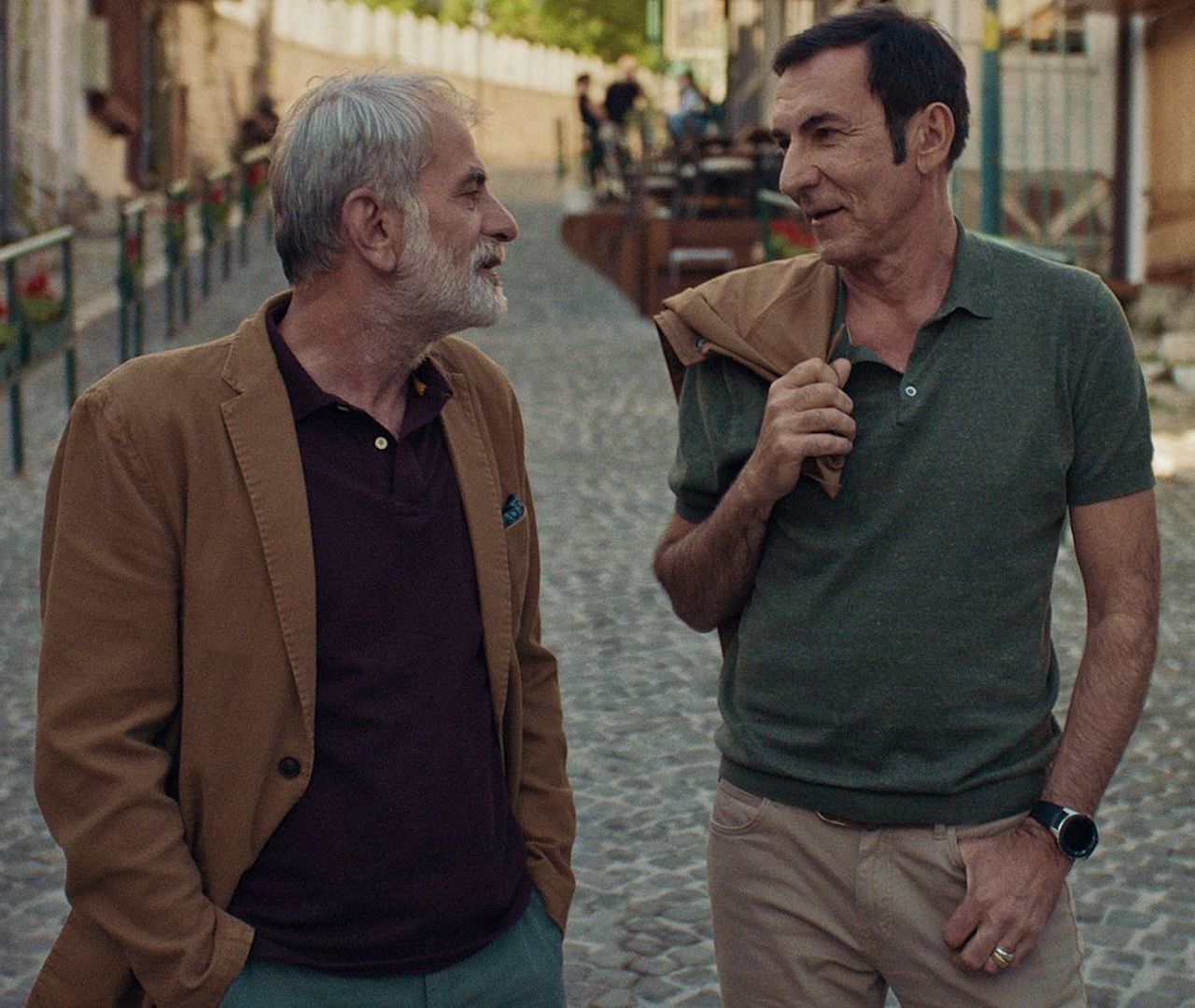 The third day of the Trieste Film Festival sees the debut of the short film competition and the sections Corso Salani Award and Off the Screens, while the screenings of the feature film competition, documentaries and Art&Sound continue.

At the Rossetti Theatre at 11:00 a.m. we begin with the out-of-competition feature film in international premiere DESET U POLA by Danis Tanović (A not so friendly neighbourhood affair), Bosnia and Herzegovina – Turkey, 2021, HD, col, 90′, Bosnian language version), premiered at the Sarajevo Film Festival 2021 the film is set in the same city in May 2021, the old city is trying to recover after a long and difficult year since the beginning of the pandemic. When one morning a woman from Zagreb enters Enis’s shop and says she has come to eat “the best kebab in Sarajevo”, the question will cause a ruckus in the city…
At 14:00 Off the Screens presents the Italian premiere of DAS MÄDCHEN UND DIE SPINNE by Ramon Zürcher and Silvan Zürcher (The Girl and the Spider, Switzerland  2021, HD, col., 98′ German language version), a delicate sentimental comedy about two girls in modern-day Switzerland based on the narrative device of a move that interrupts their cohabitation. Described as “a poetic ballad about change and transience”, this is the second feature by the Zurcher twins, new talents in Swiss cinema, and was the surprise of the Encounters section at the last Berlinale, where it won several awards.
At 4:00 p.m. it’s the turn of the Short Film Competition with some of the most interesting proposals from Central and Eastern European cinematography.
At 6:15 p.m. the Feature Film Competition sees the Italian premiere screening of LUANESHAT E KODRËS by Luàna Bajrami (The Hill Where the Lionesses Roar, Kosovo – France / Kosovo – France, 2021, HD, col., 83′, Albanian language version) and takes us somewhere in Kosovo, to a small remote village where three young women see their dreams and ambitions suffocated. In their quest for independence, nothing can stop them.
Premiered at the Directors’ Fortnight at Cannes 2021, the film won the Best Actress Award for Flaka Latifi, Uratë Shabani, Era Balaj at the Sarajevo Film Festival.
At 20:00 the Feature Film Competition presents WOMEN DO CRY by Mina Mileva and Vesela Kazakova (Women Cry, Bulgaria – France, 2021, HD, col., 106′ Bulgarian language version), based on a true story where the fragility and absurdity of a contemporary Bulgarian family are portrayed against the backdrop of violent protests against gender equality, the film was presented at the Cannes Film Festival 2021 in the “Un Certain Regard” section.
At 10:00 p.m. the Feature Film Competition presents the international premiere of MRAK Dušan Milić (Darkness, Serbia – Denmark – Bulgaria – Italy – Greece, 2022, HD, col, 104′, language: Serbian – English – Italian). In Kosovo after the Balkan war, a family lives under the protection of the KFOR military units, which defend the population only during the day. At night everything changes and fear takes over, stealing their sleep. There is no proof, but something sinister and terrifying is happening, and night after night their fears grow… Mrak is one of the selected projects, and winner of a special mention, at This is It, during the last edition of When East Meets West.

At the Ambasciatori Cinema from 10:30 am the Corso Salani Award presents two films: VIAGGIO NEL CREPUSCOLO by Augusto Contento (France – Italy 2021, HD, col. & b-n, 142′ Italian language version). Viaggio nel crepuscolo (Journey into the twilight) follows the roads that lead into the cold darkness of Italian decline: of the family, patriarchal society, educational institutions, religion… By mixing fiction and documentary, the film radically deconstructs narrative forms. Bellocchio’s films become poetic verses that create new meaning; the same applies to the archives, whose use is no longer functional to narration, but to poetry. Viaggio nel crepuscolo premiered at the last Venice Film Festival. Followed at 2:30 p.m. by DAL PIANETA DEGLI UMANI Giovanni Cioni (Italy – Belgium – France, 2021, HD, col.& b-n, 84′, language: Italian – French – English) Dal pianeta degli umani begins in the silence of the Ventimiglia border between Italy and France, a border that is no longer talked about, with thousands of migrants stranded, and it is even worse, this silence, as if nothing were happening. The film begins as a survey and becomes a fantastic fairy tale, narrated by a chorus of frogs. In this fairy tale a scientist experiments with a rejuvenation cure using monkey testicles. Dr Voronoff really existed, and in the 1920s his fame was worldwide. His villa is there, above the border that migrants try to cross. Premiered at the Locarno Film Festival.
At 4:30 pm Art&Sound presents the Italian premiere of MILAN KUNDERA: OD ŽERTU K BEZVÝZNAMNOSTI by Miloslav Šmídmajer (Milan Kundera: from The Joke to Insignificance, Czech Republic, 2021, HD, col. & b-n / b-w, 95′ v.o. Czech – French). Milan Kundera is an author shrouded in mystery, he has not given a single interview in 30 years and does not appear in public: we must therefore get to know him through his works.
At 6:30 p.m. we reconvene with the Documentary Competition in Italian premiere with KRAI by Aleksey Lapin (Austria 2021, HD, b-n, 123′ language: Russian – German – English – Italian). Russian-born director Aleksey Lapin returns to Jutanovka, his family’s home village on the Ukrainian border, where he used to spend the summer, claiming that he came to shoot a historical film that will be set in Jutanovka itself.
At 20:45, Marija Zidar’s ODPUŠČANJE (Reconciliation, Slovenia – Serbia – Montenegro – Kosovo, 2021, HD, col, 82′, Albanian language version) tells us about an 18-year-old girl killed in a bitter family feud in the Albanian highlands. The grieving father is tormented by pressure from the local bishop and the president of an NGO, who ask him not only to forgive the imprisoned murderer and his family, as Christians, but also to reconcile with them, as the ancient tribal code, Kanun, once required. Best documentary at the last Slovenian Film Festival.
At 10:30 p.m. the last in the competition of the day FILM BALCONOWY by Paweł Łoziński
(From the Balcony, Poland, 2021, HD, col., 100′, Polish language version), an observational documentary film project. The director observes people from the balcony of his flat in Warsaw, doing what he likes best: observing the world around him. Łoziński devoted more than 2 years, conducting more than 1,000 interviews. The conversations reveal emotions, thoughts, ways of behaving and show a sincere reflection on the human condition. Grand Prix of the Settimana della Critica at the Locarno Festival.

Also on Sunday the Teatro Miela is the home of the TSFF DEI PICCOLI. Before the theatre, however, a walk in the harbour, a hidden treasure, is proposed for children in search of the hidden treasure in the Old Port! Imagine action and scenes from the movies with industrious sailors, a power station that energizes the port and makes the cranes move, a drawbridge over the Grand Canal and many other surprises. Many clues with which children will put together a colourful puzzle.
At 11:00 a.m. MY FIRST TIME AT THE CINEMA! by Igor Prassel of Animateka presents a selection of short films of 40 minutes each aimed at children aged 2 and over. Carefully selected films, without dialogues, funny and engaging. Auteur shorts and episodes from internationally successful series: colourful animals, fantastic creatures and drawn puppets await you at the cinema for a special journey!
At the same time and for older children Costanza Grassi has thought of LEGGENDARIA: LABORATORY OF EPIC TRAMES AND MYTHIC STORIES which will be held in via Pescheria 4: Trieste is the perfect set. It has beauty, magic, landscapes, legends and secrets. Trieste is the perfect set. It has beauty, magic, scenery, legends and secrets, and the stories it can inspire are many and of all genres: dealing with unlucky ladies turned into rocks, princesses so desperate that they cry a river of tears, the king of the winds and his mischievous daughter Bora, we will play at inventing an epic, intricate, imaginative plot and complete an ideal map of where to shoot a film.
At 11:30 a.m. at the Miela we will again have the workshop LE MERAVIGLIE DEL PRECINEMA organised by Schermi e Lavagne / Cineteca di Bologna. On 28th December 1895 Auguste and Louis Lumière introduce the cinematograph to the public. It was the invention that shook the art (and not only) of the coming century. However, attempts to trick our eyes into seeing what is not actually there – movements, distances, figures – had begun long before that. The workshop will allow us to discover thaumatropes, zootropes and many other curious objects that preceded and accompanied the birth of the cinematograph.
Completing the weekend for children at 4pm is THE MAGIC LANTERN, MAGIC LIGHTS… BEFORE THE CINEMA by Paolo Venier. All magic requires a magician, and ours is called a lantern maker, with whom you will live a unique experience illuminated only by the light of a lamp. The workshop will let you discover how magic lanterns work, which, even before the birth of cinema, represented the attraction of projected images. Stories will be invented and drawings made to relive the fascination of this machine of wonders that has enchanted adults and children for more than two centuries.
On 22 – 23 January a selection of short films from the TSFF dei Piccoli will also be online at www.cinetecamilano.it Single ticket €5 for the entire programme.
For every workshop/walk ticket purchased a ticket for a TSFF DEI PICCOLI screening is free.
INFO +390403476076, prenotazionitsff@gmail.com