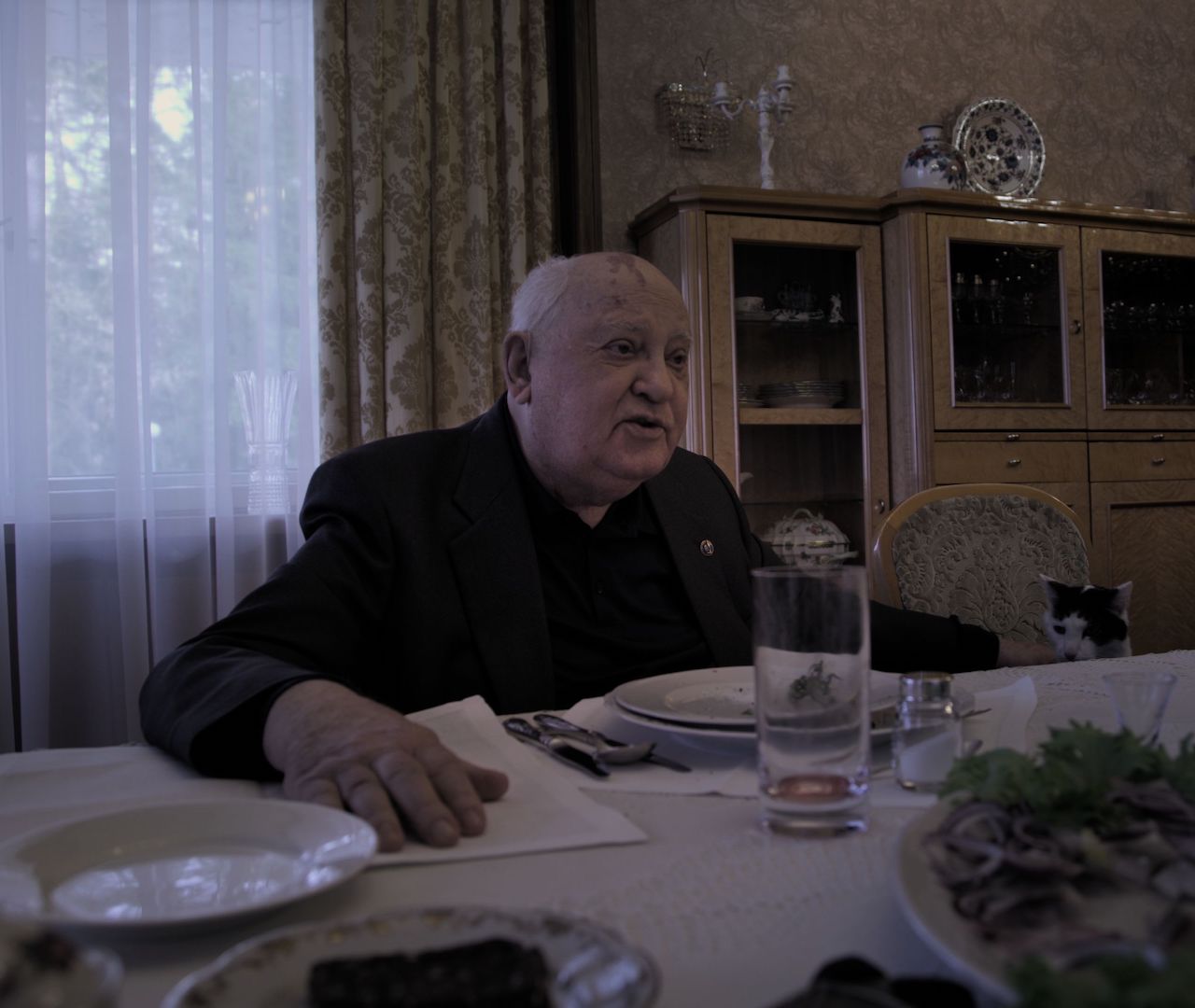 The fourth day of the Trieste Film Festival continues the short film, feature film and documentary competition and the Corso Salani Award and Off The Screens sections, while the feature film competition, documentaries at Art&Sound and the Carte Blanche Manskij section make their debut.

At the Rossetti Theatre we begin at 11:00 with the out-of-competition feature film CENZORKA by Peter Kerekes (107 mothers, Slovakia – Czech Republic – Ukraine, 2021, HD, col., 93′, Russian – Ukrainian language version) in which Lesya has committed a crime of passion for which she must serve seven years in a women’s prison in Odessa. She has just given birth to her first child and is now about to enter a world populated exclusively by women. The film was presented in the “Orizzonti” section of the Venice Film Festival, where it won the award for Best Screenplay.
At 2:00 p.m. in the Feature Film Competition we find BEBIA, À MON SEUL DÉSIR by Juja Dobrachkous (Bebia, To My Only Wish, Georgia – UK, 2021, HD, b-n, 113′, Georgian/Russian language version). Returning home for her grandmother’s funeral, 17-year-old Ariadna – according to an ancient custom – must cross the wild Georgian countryside to reunite her soul with her body. As she traverses this gruelling and rugged landscape, Ariadna is forced to confront the complex and sometimes cruel role the matriarch played in her childhood.
At 16:00 we see the second part of the Short Film Competition and at 18:15 we have another feature film in competition, ÎNTREGALDE by Radu Muntean (Romania, 2021, HD, col., 104′, Romanian language version) Maria, Dan and Ilinca set off on their usual end-of-year humanitarian mission with a group of friends from work. In their big SUVs, they drive up unpaved mountain roads to remote villages to distribute donation packages to the locals. But when their car gets stuck in a ditch in the woods, the sawmill turns out to be abandoned, and they are forced to spend the night with the bewildered old man, their ideas about empathy and solidarity are put to the test.
At 8:00 p.m., also in competition is ORKESTER by Matevž Luzar (Orchestra, Slovenia – Croatia 2021, HD, b-n, 111′, Slovenian-German Austrian language version). The merry members of a Slovenian brass band travel by bus to perform in a small Austrian town. They sing, celebrate and drink the whole way. But not everything goes as planned. Five different stories show us how hiding one’s actions and intentions is the best way to make them awkward.
The day of screenings at the Rossetti ends with the out-of-competition screening of DURNA ÇIRAĞI by Hilal Baydarov (The Light of the Crane, Azerbaijan, 2021, HD, col., 101′, Azerbaijani language version) In a suspended landscape and time the mysterious story of four women, perhaps kidnapped or perhaps enlightened by young Davud, unfolds. The latest film, beautifully shot and set, by Baydarov, the talented filmmaker who has given cinematic visibility to a fascinating country like Azerbaijan and whom TSFF has been following for several years now.

At the Ambasciatori Cinema at 11:00 a.m. in the Corso Salani Awars section we see the film ISOLE by Mario Brenta, Karine de Villers (Italy – Belgium, 2021, HD, col., 78′, language: Italian – English – Spanish – French).
Presented at the last Cinemambiente Festival in Turin, the film is a choral tale of solo voices, a patchwork of more than seventy personal gazes, of singular visions of the world, sensitive fragments of an uncertain and changing actuality that invites us to think, to reflect.
At 2:30 p.m. in the Documentary Competition we see the Italian premiere of JUŻ TU NIE WRÓCĘ by Mikołaj Lizut (Never Coming Back, Poland, 2021, HD, col., 62′, Polish language version): a lonely teenager, abandoned to herself, grows up in a reformatory. She will do anything to love and feel loved. Even having a baby.
At 5:00 p.m. Art&Sound presents GIOVANNA, STORIE DI UNA VOCE by Chiara Ronchini (Italy, 2021, HD, col. & b-n, 90′, Italian language version), a portrait of Giovanna Marini who has been telling stories and history through music all her life. Since 1958 she has been composing, collecting and interpreting songs of oral tradition, weaving an “alternative” history of our country, made up of voices, people and paths that do not belong to the history of the great and famous. An astonishing voice, an incredible woman, outside any scheme or school, for sixty years she has been unstoppably crossing places, struggles and movements all over Italy with a guitar in her arms.
From 6:45 pm we return to the Documentary Competition with MUZEJ REVOLUCIJE by Srđan Keča (The Museum of the Revolution, Serbia – Croatia – Czech Republic, 2021, HD, col., 91′, language: Serbian). In 1961, plans were made in Belgrade to build a museum-tribute to socialist Yugoslavia. Conceived to “safeguard the truth” about the Yugoslav people, the project never went beyond the construction of the basement. The abandoned building now tells a very different story from the one imagined 60 years ago. In the damp, dark space live the outcasts of a society reshaped by capitalism.
At 8:30 pm we find DELO by Nina Guseva (The Case, Russia, 2021, HD, col, 76′, Russian language version). In the summer of 2019, Moscow is in the grip of opposition protests. Three thousand people are arrested and among them is the young political activist Konstantin Kotov. The courageous lawyer Maria Eismont fights against the Russian judicial system in her defence because she is convinced that the arrests are politically motivated.
At 10:30 pm LOOKING FOR HORSES by Stefan Pavlović (Looking for Horses, Netherlands – France – Bosnia and Herzegovina, 2021, HD, col, 88′, Bosnian-English language version) a film about the friendship between the director and a fisherman. One no longer speaks his mother tongue due to a stutter, the other has lost his hearing during the civil war in Bosnia. They look for ways to communicate, while the camera indulges in the growing bond between them.

At the Miela Theatre at 9:00 we have a screening for schools in collaboration with the Cinemambiente Festival of Turin. The film presented is called THE GREEN LIE by Werner Boote (The Green Lie, Austria, 2018, HD, col., 97′, language: German – English – Portuguese – Indonesian) and argues the thesis that multinationals would like us to believe that we can save the world by buying the right things: ecological electric cars, sustainably produced food, fair production, but this in the author’s opinion is a widespread and dangerous lie.
At 2.15pm the Carte Blanche Manskij tribute presents the Italian premiere of KOTLOVAN by Andrej Grjazev (In the Big Yard, Russia, 2020, HD, col, 70′, Russian language version), a found footage film made up of countless videos found on YouTube, in which the Russian people make a direct appeal to President Putin. A kaleidoscope of the country’s state of mind, from submissive pleas to pure rage at injustice and rampant corruption. In 1930 Andrei Platonov wrote the novel In the Great Yard about totalitarianism and utopia. Grjazev’s work is a kind of modern and passionate update of it.
At 4:00 p.m. the same section presents the Italian premiere of Dar’ja Sljusarenko’s DŽOJ (Gioia, Russia, 2020, HD, col., 63′, Russian language version) In the tent of the Gioia circus, the same things are repeated every day: the artists take down and put back up the tent with the dome full of stars, they perform and move on to the next place. Valera the clown always performs alone, until one day he is joined by a new companion, Yana, also a clown, and Valera begins to dream of conquering the circus world together with her. This is followed by Reka Valerik’s TICHIJ GOLOS (Silent Voice, France – Belgium, 2020, HD, col, 51′, language: English – Chechen – French) about Khavaj, a young and promising mixed martial arts fighter who has to leave Chechnya and flee to Brussels when his brother discovers his homosexuality and threatens him with death. In Brussels, due to the trauma of exile, Khavai is struck by mutism.
At 6:15 p.m. there will be the Italian premiere of the out-of-competition documentary GORBACHEV. HEAVEN by Vitalij Manskij (Gorbačëv. Paradise, Latvia – Czech Republic, 2020, HD, col., 100′, Russian language version). Ninety-year-old Mikhail Gorbačëv lives in a modest house outside Moscow, waiting for the moment when he will be called to join the ranks of the most significant personalities of the 20th century. History will judge Gorbačëv, but in this film he gives us his personal, final testimony.
The last film of the day at the Miela is Nikolaj N. Viktorov’s ČERMET (Beaumonde the Wrecker, Russia, 2020, HD, col., 71′, Russian language version), also in its Italian premiere. It tells the story of Ilya, who has learned the hard way in the harsh reality of the far north of Russia, books in literature lessons and the power of his fists from his father, who has tried to raise his son along the right path. Ilya aspires to a life more in keeping with his stature, but unstoppable inner demons are a major obstacle to his dream of conquering the nation’s capital.