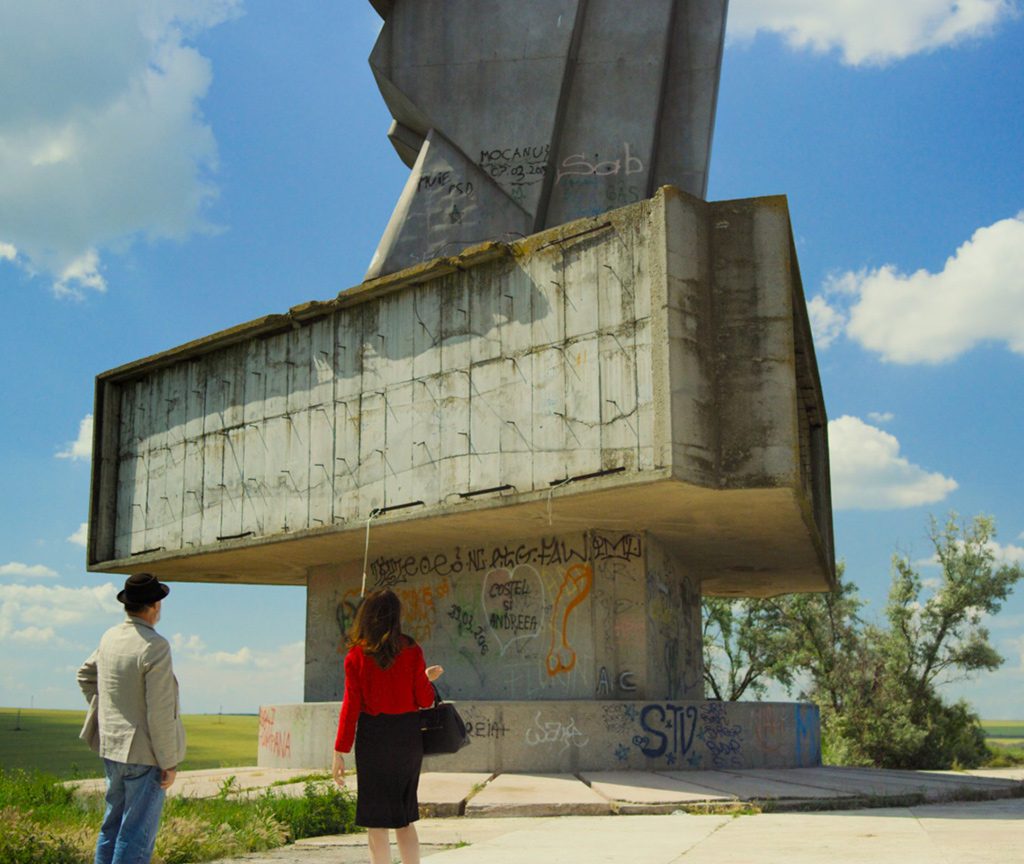 Masterclass, the sections of Oltre I Bordi, Fuori Dagli Sche(r)mi and the competition at the Teatro Miela, the Politeama Rossetti and the Cinema Ambasciatori on Wednesday the 25th of January

The fifth day of the Trieste Film Festival will start at the Teatro Miela with the MASTERCLASS of the screenwriter Elma Tataragić “The passion and the responsibility of storytelling”; the event will be in English.

Starting at 2:00 p.m. the Teatro Miela will host Oltre I Bordi (Beyond The Boundaries), a retrospective focused on the Czech and Slovak cinema that presents a sequence of titles subdivided for themes. The first category will be “Ai Margini” (At the Margins), which includes MARIJKA NEVĚRNICE by Vladislav Vančura CS, 1933, 76’ (Marijka the Unfaithful) and ZEM SPIEVA by Karel Plicka CS, 1933, 62’ (The Earth Sings). The second category, “la Brama di Un Altro Mondo” (Longing for Another World) features EROTIKON by Gustav Machatý CS, 1929, 89’ (Eroticon), silent film with Czech intertitles and musical accompaniment, PRAHA CALCUTTA 1935 CS, 1935, 20′ (Prague Kolkata 1935) and SVĚTLO PRONÍKÁ TMOU by Otakar Vávra CS, 1930, 5’ (The Light Penetrates the Dark). The third category, “Il Pericolo Al Di Fuori” (The Danger Without), is scheduled at 7:30 p.m. with the screening of BÍLÁ NEMOC by Hugo Haas CS, 1937, 109’ (The White Disease) and VZPOURA HRAČEK by Hermína Týrlová, František Sádek CS, 1947, 14’ (The Revolt of the Toys). Finally, the category ”Confini Incerti” (Uncertain Borders), with CRISIS by Herbert Kline, Hanuš Burger, Alexandr Hackenschmied US, 1938, 68’ and OSIDLUJEME POHRANIČÍ by Ivan V. Frič CS, 1946, 10’ (We Move to the Borderland).

The schedule at the Politeama Rossetti will instead start with the section Fuori Dagli Sche(R)Mi (Off The Beaten… Screens) and the screening of AURORA’S SUNRISE by Inna Sahakyan AM – D – LT, 2022, 97’ at 2:00 p.m. Aurora lost everything during the Armenian Genocide. Four years later, she escaped to New York, where her story became a media sensation, starring as herself in Auction of Souls. With a blend of animation, interviews, and surviving footage from her lost silent epic, Aurora’s Sunrise revives a forgotten story. The film was presented at the latest Annecy International Animation Film Festival and is Armenia’s candidate at the Oscar 2023.

At 4:00 p.m. we will see the out-of-competition feature film LICZBA DOSKONAŁA by Krzysztof Zanussi PL – I – IL, 2022, 87’) The Perfect Number), the return of a great friend in Trieste. Joachim is a mature man whose life has been a success story. He meets David, a young mathematical genius who is now looking for the right field to use his talents in. The two men are at completely different stages of life. What can they learn from each other? How can one choose between intellect, faith and love? The latest film by one of the great masters of Polish cinema.

At 6:00 p.m. the Italian premiere of the out-of-competition short film POTEMKINIŞTII by Radu Jude RO, 2022, 18’ (The Potemkinists) will precede the screening of the short film competition – COMPILATION 1.

At 8:00 p.m. master Zanussi will receive the Eastern Star Award, then the feature film competition is scheduled. The first screening will be a journey in the world of bodybuilding with SZELÍD by László Csuja and Anna Eszter Nemes  H, 2022, 92’ (Gentle). Edina, a female bodybuilder, is ready to sacrifice everything for the dream she shares with Adam, her partner and trainer: to win the World Championship. The strange love she finds on her journey leads her to realise the difference between her dreams and her true self. Gentle premiered at Sundance in 2022.

At 10:00 p.m. we will see MSHVENIERI ELENE by George Ovashvili GE – TR – F, 2022, 91’ (Beautiful Helen): when twenty-five-year old Helen returns home to Tbilisi after having studied abroad, she finds it hard to connect to the world she had left behind. She meets middle-aged film director Gabo – who is going through a crisis of his own – and the two set out on a trip in search of inspiration. As their journey progresses they find themselves exploring the meaning of life, love and storytelling.

This fifth day sees the addition of another location, the CINEMA AMBASCIATORI, where the out-of-competition feature film OBEŤ by Michal Blaško SK – CZ – D, 2022, 91′  (Victim) is scheduled at 11:00 a.m. When the son of Ukrainian immigrant Irina is attacked, the whole city stands up in solidarity with his family and condemns their Roma neighbours, suspected of having committed the crime. Soon, however, another truth begins to emerge. The film premiered at the Venice Film Festival, in the section “Orizzonti”. The Italian premiere of two out-of-competition documentaries will be screened at 2:00 p.m. The first will be LITURHIJA PROTITANKOVYCH PEREŠKOD by  Dmytro Sucholytkyj-Sobčuk UA – US, 2022, 12’ (Liturgy of Anti-Tank Obstacles), which was already presented in Toronto, Sarajevo and Doclisboa. In the Ukrainian nationwide resistance, sculptors construct anti-tank obstacles in their art workshops. The silent forms/ shapes of Ukrainian personalities, angels, Cossacks, and replicas of Jesus Christ are frozen, in anticipation of new creations. Craftsmen weld metal defense items for the Armed Forces of Ukraine. The second documentary is MARIUPOLIS 2 by Mantas Kvedaravičius LT – F – D, 2022, 112′. In 2022, Kvedaravičius returned to Ukraine, at the heart of the war, to be with the people he had filmed in 2015. Following his death, his collaborators have put all their strength to continue transmitting his work and his vision. The film depicts life and reveals images that convey both tragedy and hope. The film premiered at Cannes, and was awarded Best Documentary at EFA Awards.

The Corso Salani Award will be presented at 4:00 p.m., with IL CANTO DELLE CICALE by Marcella Piccinini I, 2022, 69’ (The Song of the Cicadas), a story of rage and poetry about the thread that unites a mother with her daughter: close yet distant, silent yet warriors. At 6:00 p.m., with A PROVINCIAL HOSPITAL by Ilian Metev, Ivan Chertov, Zlatina Teneva BG – D, 2022, 106’ we will go back to the documentary competition. Kyustendil is a sleepy town in the Bulgarian mountains that has been hit by Covid. Many hospital patients live in constant fear of deteriorating quickly and being sent ‘upstairs’. ‘Upstairs’ is the intensive care unit, where only a handful are known to have survived. Unexpectedly, thanks to Dr. Popov, light and laughter echo through the hospital halls. In competition at Karlovy Vary FF.

KRYCHKA PAM”JAT’ by Ihor Ivan’ko UA –SK, 2022, 85’ (Fragile Memory) is scheduled at 8:00 p.m.: Leonid Burlaka worked at Odessa Film Studio in the 1960s. Today he is in his 80s and has been diagnosed with Alzheimer’s. As his memory fades, his grandson and filmmaker Ihor follows the trail left by Leonid through film rolls, videos, letters and forgotten friends. Igor realizes that his grandfather’s life has much historical value. The film was presented, among others, at Krakow and DocAviv-Tel Aviv.

The documentary competition will end at 10:00 p.m. with the screening of IĻĠUCIEMA MĀSAS by Elita Kļaviņa LV, 2022, 60’ (Sisters in Longing). They are bonded by their pain, longing, and their current residence – a semiopen prison for women. While staging Anton Chekhov’s play Three Sisters together with professional actors, imprisoned women reveal their life stories, dreams, and the longing for a decent life outside prison walls.

In addition, it will be possible to book for the guided tour of GENERALI’S HISTORICAL ARCHIVE FOR TSFF of Thursday the 26th of January (at 11:00 a.m. in English and at 4:00 p.m. in Italian) and Friday the 27th at 11:00 a.m. (just Italian) at Palazzo Berlam, by contacting  prenotazionitsff@gmail.com.