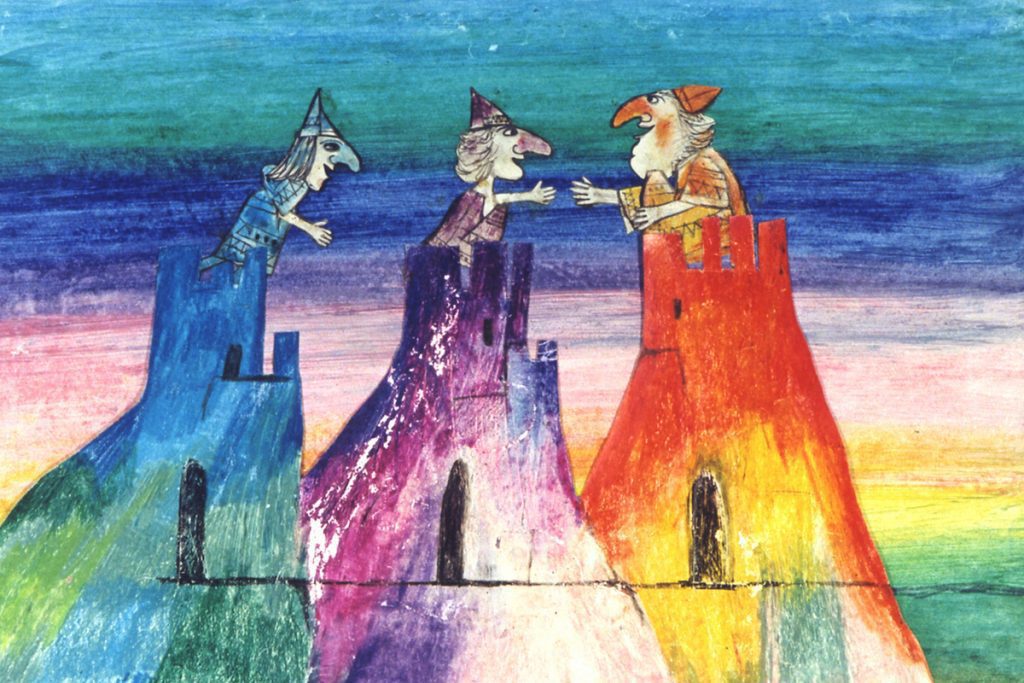 FAIRY TALES IN A ROW

A programme of short films dedicated to fairy tales and popular legends: from the timeless masterpieces of the masters of Italian animation Giulio Gianini, Lele Luzzati and Osvaldo Cavandoli, to forays into contemporary auteur animation with the films The Marriage of Tom Thumb. A programme organised by Schermi e Lavagne of Cineteca di Bologna.

ALÌ BABÀ
Giulio Gianini, Emanuele Luzzati
Italy, 1970, col., 11’
Alì Babà is a child with a big turban who “in order to pass the time having fun, does everything he can to do nothing”.Born as an illustrated book, Alì Babà became an animated film made with cut out animation (animation of paper cuttings) by director and animator Giulio Gianini and illustrator and set designer Emanuele Luzzati.

LE CHAT CAMÉLÉON
(The Chameleon Cat)
Ernest Ansorge
Italy – Switzerland, 1975, col., 10’
Set in Switzerland, The Chameleon Cat is the story of little Hanzi and his cat who has an extraordinary power: at the sound of a special flute, he is able to transform himself into any other animal… An extraordinary example of sand animation, of which Ernest Ansorge was a pioneer, the film is part of the “Fables of Europe” project, promoted in the 1970s by the Corona Cinematografica production company, whose heritage is now preserved in the Cineteca di Bologna archives.

C’ERANO TRE FRATELLI
(There Were Three Brothers)
Giulio Gianini, Emanuele Luzzati
Italy – Switzerland, 1979, col., 9’
Three brothers, Tommasone with an orange nose, Tommasetto with a purple nose and Tommasino with a turquoise nose, all dream of marrying the same girl, the daughter of the King of Puglie. They go to ask for her hand from the king, who betroths her to those of them who will bring the best gift. Friends and collaborators from 1957 to 1994, Giulio Gianini and Emanuele Luzzati created thirty works together, including self-produced and commissioned films, films for RAI and Televisione della Svizzera italiana, opening and closing credits and advertisements. Together they have created a universe animated by bright colours and populated by unforgettable characters.

LE FAVOLE
(Fairy Tale)
Osvaldo Cavandoli
Italy, 1979, col., 3’
A simple white line comes to life and becomes a little man, a bit gruff but with an overwhelming sense of humour: he is mister Linea, the most famous and loved character of Osvaldo Cavandoli, master of Italian animation. Over a period of 30 years, Cavandoli drew more than seventy episodes of the “Linea” series, giving Mr. Linea ever new adventures. In this case we find him dealing with characters from classic fairy tales, the fairy, Pinocchio, Puss in Boots…

MERLOT
Marta Gennari, Giulia Martinelli
Italy, 2016, col., 5’
Created as a diploma film at the end of the study cycle at the Italian “CSC Animazione – Centro Sperimentale di Cinematografia Piemonte”, Merlot is an ironic reinterpretation of the Little Red Riding Hood fairy tale. Here we find the grandmother, the wolf and the same little girl struggling this time, however, with a bottle of wine. Marta Gennari and Giulia Martinelli chose a linear, minimalist visual style for their short film and a cartoon structure inspired by the work of the great Dutch animator Paul Driessen.

LE NOZZE DI POLLICINO
(Pollicino’s Wedding)
Beatrice Pucci
Italy, 2018, col., 6’
Made in puppet animation, this is based on the popular fairy tale Gallo Cristallo from the Marches region, contained in the Fiabe italiane collection by Italo Calvino. The short film is, however, only the first in a series that the author is working on as part of the “FLIP project – Fronte Liberazione Immaginario Popolare” (l.t. Imagery People’s Liberation Front). FLIP envisages the re-elaboration of a number of traditional Italian fairy tales with the idea of recovering the imagery of oral narration, as a system of transmission of knowledge passed down from century to century.