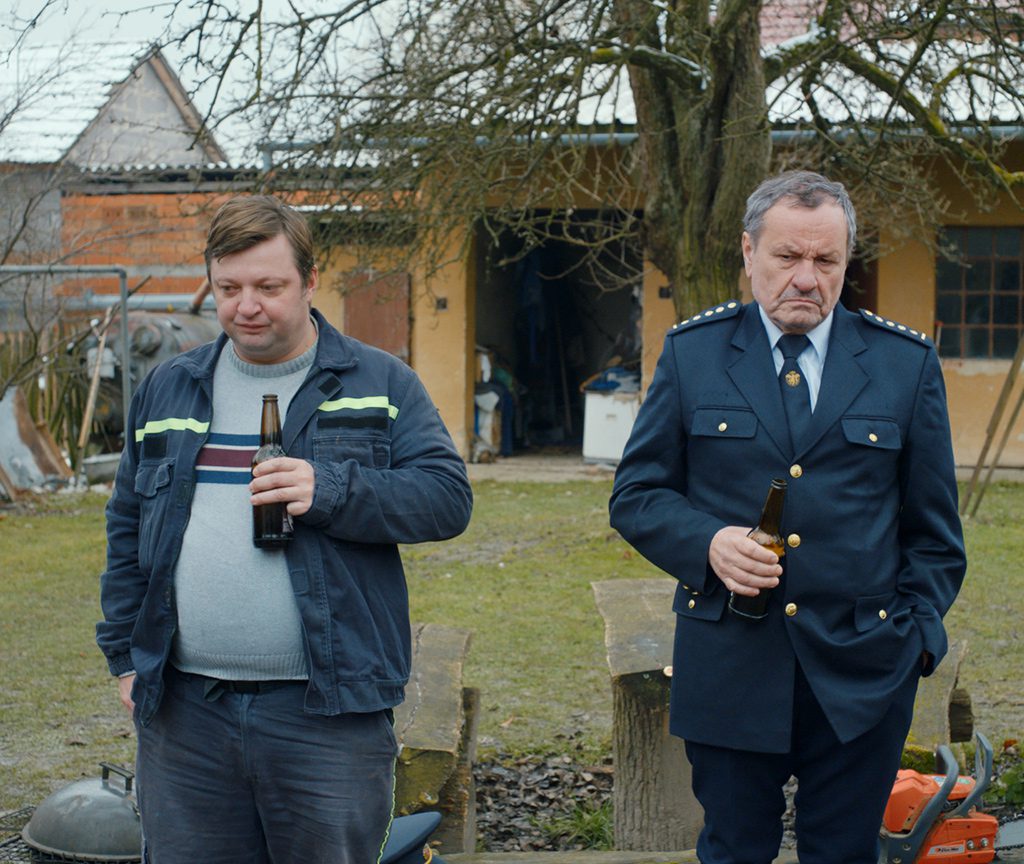 Standa and Bronya are volunteer firefighters in a small village. While the clumsy Standa is looking forward to the birth of his son soon, his older friend Bronya is no longer enjoying life because his wife has recently died. Things begin to change when a van crashes into a crowd of people during the Easter Fair. Before anyone notices, the driver runs away from the car crash. People believe it is a terrorist attack and the festive mood is replaced by an atmosphere of fear, hatred and misinformation, into which the locals, including the frightened Standa, sink. Bronya, who is convinced of terrorism, is trying to do something to improve the situation. The sense of danger pumps new blood into his veins, and the fire brigade becomes a militia.The film premiered at the Berlinale 2022, in the “Panorama” section.

“The film is an insight into the universe of a small Czech village and its people. Its inhabitants worry about migrants and muslims instead of dealing with everyday life problems. Their possible enemy is completely abstract, yet present thanks to media and gossip. Such an atmosphere is not helping to form one’s opinion. People can easily succumb to xenophobia, racism and extremism. I want to search for the core of this radical attitude within us all – the fear. The film is based on the conviction that people naturally do not have intent to be mean. Their wrong ideas, acts and behavior are based on a blind good faith. We intend to empathize with every single person’s point of view. And above all, we are trying understand their thinking without judgment or mockery.” (A. K. Rybanský)

Adam Koloman Rybanský
The Czech film director and screenwriter Adam Koloman Rybanský was born in 1994 in Hradec Králové. He studied film directing at FAMU in Prague since 2013. During his studies he wrote and directed several short films which were shown at various international film festivals. He was nominated for the best student film at the Czech Lion Awards in 2017 and 2018. In 2021, Rybanský graduated from FAMU with his feature debut Somewhere Over the Chemtrails. The Trieste FF presented in 2019 his short film Home Sleep Home.