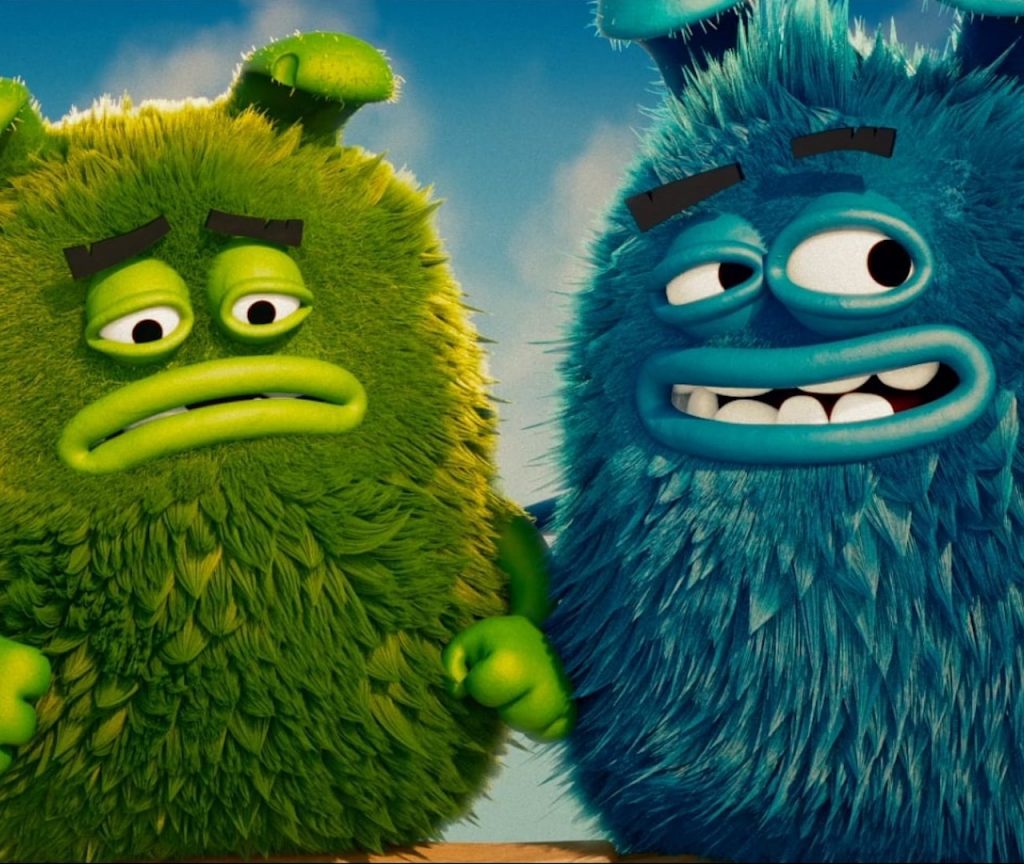 MY FIRST TIME AT THE CINEMA!

Your first time at the cinema? The Animateka festival has selected two programmes of short films of 40 minutes each aimed at children aged 2 and over. Carefully selected films, without dialogue, that are entertaining and engaging. Short art films and episodes from internationally successful series: colourful animals, fantastic creatures and drawn puppets await you at the cinema for a special journey!

Tickets can be purchased at Teatro Miela on 22nd and 23rd January 2022.

Koyaa wants to paint, but his sheet of paper suddenly starts folding into a paper airplane, taking off with a buzz. Koyaa chases after it as it keeps transforming into various shapes, being super elusive!

A hungry weasel attacks a flock of birds living on a tree, the last one still standing upright. The birds are trying to keep the tree in balance, while the weasel is persistently trying to climb up its trunk. Its persistence is putting the tree’s fragile balance ever more at risk, and its growling stomach is not letting up until it is too late.

Patchwork Clam has a problem: she can’t play because she’s way too shy! Will the Patchwork Pals find a way to make her come out of her shell?

An animated short film for children about tolerance towards strangers. The proverbial ‘black sheep’ will be bullied out of the herd but only the brave outsider can protect them from harm.

Mr. Philodendron sits in front of his house on a pleasant sunny morning. He wants to have a glass of water but he sadly finds it empty. In his innocent way of seeing things he tries to catch the cloud to get some water, and instead crashes into the Apple Tree.

It is springtime and the little bird is taking care of the first leaves on the tree. Then the blossoms open up one by one, and the bees come buzzing along. Awakened by the sweet taste of nectar, the little bird follows them over the flower meadow. But the greedy fox is once again in pursuit. In previous episodes, the little bird met a lost leaf, a churlish squirrel and a farting caterpillar. Now it can enjoy the company of some new neighbours.

Three frogs are fighting over a tasty fly. But there is something the fly can teach them.

An elephant lives in a town among people and works as a street cleaner. One day, he sees a big billboard advertising a bicycle. It seems the perfect size for him! This is the minute the elephant’s life changes: he has to get this bicycle whatever it costs him.

On a small island a bunch of exotic creatures run across each other.

Spuffies have a serious thing for jujubes. When they’ve eaten the very last delicious fruit and hunger is about to strike, they head to the old Poofler’s place through the murky forest. There they meet and befriend a Spider who shows them the way to the jujubes grove.

In this ultrashort animated film, we follow an octopus who is a clean-up neat-freak. But sometimes, even though you have so many arms, you still cannot reach what you are aiming for.

A little tiger decides to take a long journey in search of his stripes.

In Ki-Ki-Do’s forest, a strange creature – a frightened long-necked Ostrich – is on the run from a ruthless hunter. As Rosalia the Pig fails to protect Ostrich, Prince Ki-Ki-Do is called to action! But Ki-Ki-Do has been hit by a tranquilizer gun and is sleeping like a baby. Ostrich seems to be doomed to spending the rest of his life behind bars…