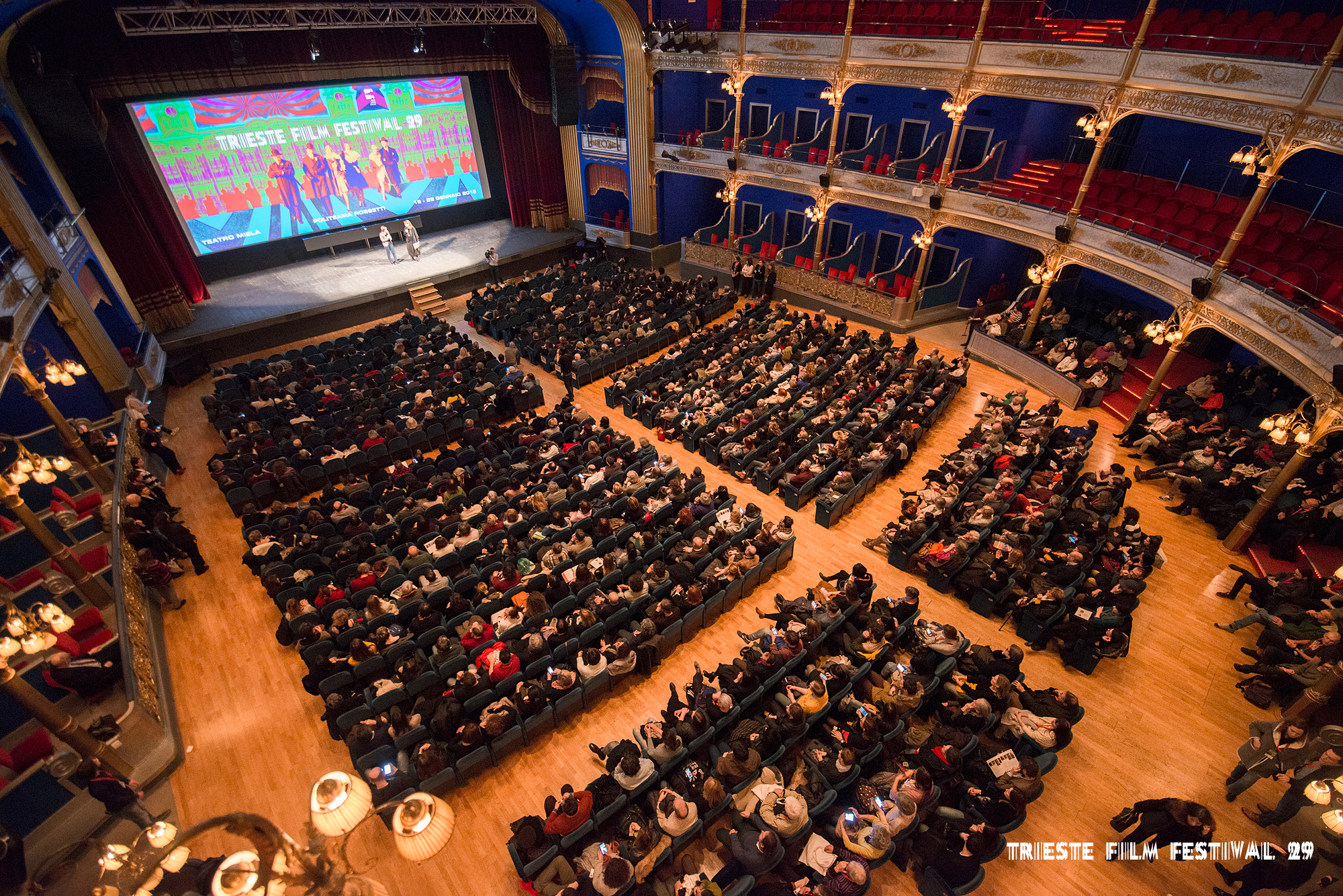 At the same time, today’s city walk “THE INVISIBLE BOY” starts from Casa del Cinema. A virtual tour entirely dedicated to the first Italian teen superhero movie directed by Gabriele Salvatores. You will discover the inaccessible locations of the first movie and some curiosities about the sequel, just theatrically released. Tour guided by the journalist Elisa Grando.

At Politeama Rossetti the first screening of the day is a 1972 film by Philippe Garrel, La Cicatrice Intérieure (The Inner Scar), for the retrospective Rebels 68. east’n’west revolution. The film is narrated in the ‘first person singular masculine’ with Pierre Clementi, the father, Nico, the mother, and Balthazar Clementi, the son. A romantic movie for Nico? “Do not ask any questions”, says Garrel, “look at it for the pleasure, how pleasant it can be to venture into the desert, to listen to Nico (in Desertshore), to admire a circular tracking shot, the strange landscapes, the distressing silence, the pained cries, the search for an unlikely and uncertain absolute”.

Competition screenings begin at 4pm with the documentary Ultra by Balàza Simonyi. Year after year, runners from around the world participate in one of the most prestigious and challenging races, the Spartathlon. A historic 246 km run from Athens to Sparta to be completed within 36 hours. The characters and the director all have their own personal reasons for joining the extreme run. None of them know if they will ever be able to succeed, but they do know that it is crucial to try, and maybe achieve the impossible. Film screening in the presence of the director.

At 6pm, the second documentary of the day: Over the Limit by Marta Prus. It reveals the successful Russian system for training athletes, based on an extreme physical and mental coercion. Elite rhythmic gymnast Margarita Mamun has reached a crucial moment in her career: she will retire soon, but she has one final goal set out for her, winning the Olympic gold. A nail-biting behind-the-scenes drama about the pain caused by rhythmic gymnastics that thrives on its beautiful aesthetics. Film screening in the presence of the director.

At 8pm, in the feature film competition, Rudar (The Miner) by Hanna Slak. In a sealed mine, deep underground, a miner finds thousands of bodies of people thrown into a pit after War World II. He faces the opposition of society by insisting on arranging a funeral for all those unidentified victims. Based on a true story. Best directing at the last Portorože Film Festival. Film screening in the presence of the director.

The last film in the competition, at 10pm, is Kratki Izlet (A Brief Excursion) by Igor Bezinović. Istria countryside, summer, a group of partygoers: a brief excursion turns into an allegorical journey into the unknown. The tale of a lost summer. Golden Arena Award at Pula Film Festival.

The day at Teatro Miela starts at 11am with the retrospective Rebels 68. east’n’west revolution and the 1968 film Baisers Volés (Stolen Kisse) by François Truffaut. A free interpretation in the manner of Charles Trenet’s “Que reste-t-il de nos amours?”, the film is permeated with the dandy spirit of 1968, one that crumbles gender conventions. Truffaut said to have made the film while distracted by the Langlois affair, but instead the extravagant, anarchic, surreal trajectory – with touches of Balzac and autobiographical notes – leads straight to May and its reflection: the Cinémathèqué.

For Art&Sound at 3pm there is Beksińscy. Album Wideofoniczny (The Beksińskis – A Sound and Picture Album). The story of an outstanding Polish painter, Zdzisław Beksiński, and his complicated relationship with his son, Tomek, an extremely popular music journalist who suffered from depression and made numerous attempts to commit suicide. The film is a family drama and documentary which has been painstakingly reconstructed using audio recordings, film and photographs from the Beksińskis’ private archive material. Last year TSFF selected The Last Family by Jan P. Matuszyński based on the same story.

At 5pm, the first part of the short film competition begins at Teatro Miela; the second part resumes at 9pm. During this break, at 7pm Rebels 68. east’n’west revolution presents Performance, a 1970 film by Donald Cammell and Nicolas Roeg. It is one of the erotic peaks of cinema: Anita Pallenberg, in bed with Chas, a killer fleeing to Notting Hill where he seduces Turner, a retired rock star (Mick Jagger). Roeg, at his virtuoso debut, adorns a hypothetical (future) cult movie with sex, hallucinogens, tributes to Kenneth Anger and verbal impertinences, rejecting a linear story and avoiding the space/time balance of what starts as a thriller.

Two talks are organized by Varcare la Frontiera. The first one, at 5pm, is Migrants Motivated By Sexuality: a talk dedicated to those who are forced to leave their country because of their sexual orientation, gender identity or profession. Massimo Premuda mediates the conversation among Porpora Marcasciano (MIT – Transgender Identity Movement), Pia Covre (Prostitutes Civil Rights Committee), Mario Di Martino (Festival Internazionale di Cinema Trans “Divergenti” of MIT), Letonde Hermine Gbedo ( “Progetto Stella Polare”), and Franko Dota (Doctorate on the Public and Political history of Male Homosexuality in Socialist Croatia 1945-1989). The second talk, at 6pm, is on Marcella Di Folco. Director Simone Cangelosi presents two documentaries on the Italian actress Marcella Di Folco, who worked with Fellini, Rossellini and Sordi, who founded Bologna’s MIT-Movimento Identità Trans (Transgender Identity Movement), and who was the first ever trans-sexual in the world to hold public office.

TSFF Little Ones organizes Quilt Movie: a needlework workshop for children, along with the seamstress of Patchworkvictim. Children will make a small bag with a camera-shaped patch. Depending on their age, the they will get involved with different stages of the project, drawing, cutting or sewing the fabric.[:]