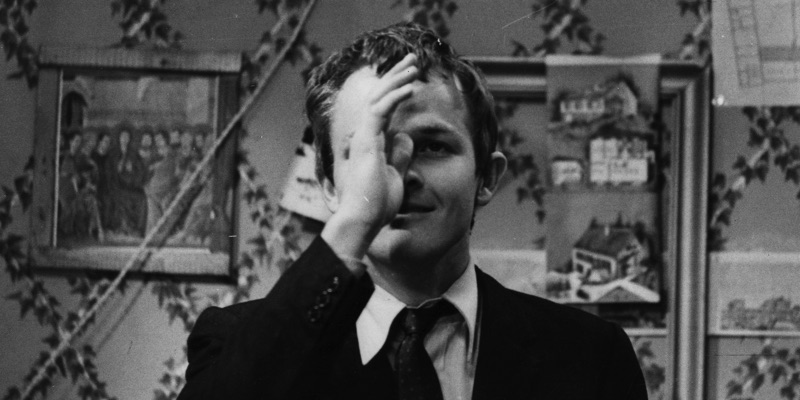 At the same time, the walk “On the Trail of Commissioner Laurenti” by Marzia Arzon begins form Casa del Cinema. You will see Trieste as the location of Veit Heinichen’s novels and his alter ego, the Police chief Proteo Laurenti. An itinerary full of art and culture, a fascinating and mysterious Trieste as seen through the eyes of a writer who has chosen to live here and was able to capture the unique character of the city and the peculiarity of its citizens, all well condensed in his protagonist.

At Politeama Rossetti at 2pm the documentary competition screenings start with Radu Jude’s Ţara Moartă (The Dead Nation). This documentary shows a stunning collection of photographs from a small Romanian town in the 1930’s and 1940’s. The soundtrack openly shows us what the photographs do not: the rising of anti-Semitism and, eventually, a harrowing depiction of the Romanian Holocaust.

At 3:30pm, the retrospective Rebels 68. east’n’west revolution follows with the screening of Marco Bellocchio’s Fists in the Pocket: its labyrinth-house, an oppressive symbol for every repressive institution, reflects the pre-1968 period with astonishing precision. The future is the fruit of that liberating madness and the beginning of a new wave in life and in cinema.

At 5:30pm, the meeting “Rebels 68 West” is on cinema and on the social and cultural turmoil of 1968 in Western Europe. The guests are Valentina Agostinis (director), Mariuccia Ciotta (film critic) and Roberto Silvestri (film critic).

At 6:30pm, in the feature film competition,  Zgoda (The Reconciliation) by Maciej Sobieszczański. Silesia, 1945. On the site of the former Nazi camp at Auschwitz-Birkenau, the Communist Security Office services create a work camp for Germans, Silesians, and Poles. In an effort to save Anna, the Polish girl he loves, Franek goes to work at the camp where she is imprisoned. He is unaware that his German friend, Erwin, also a prisoner, has been in love with Anna for years. Film screening in the presence of the director.

At 8:30pm, there is the screening of another entry in the feature film competition: Soldaţii. Poveste din Ferentari (Soldiers. Story from Ferentari) by Ivana Mladenović. Set in Ferentari, Bucharest’s impoverished ghetto, it navigates the unexpected relationship that blossoms between a young anthropologist studying “manele” pop music named Adi and the Roma ex-prisoner and homeless Alberto. A film that breaks taboos and boundaries through its portrayal of love and tenderness within the harsh environment of marginalised and largely unknown Roma communities.

The last film at Rossetti is from the retrospective Rebels 68. east’n’west revolution, Les deus amis (Two Friends) by Louis Garrel. A catalyst for the nouvelle vague and its disciples, Louis Garrel acts as a link to neuroses and whims, indiscipline and revolution, expanded eroticism and the beauty of pre and post-1968 cinema. A nouveau Antoine Doinel, he crosses the reconstructed set of the Parisian Spring, amid flames and smoke and in the trenches of the demonstrators with their red handkerchiefs and flags.

The day stars at Teatro Miela at 11am with the retrospective Rebels 68. east’n’west revolution and the screening of Reconstituirea (Reconstruction) by Lucian Pintilie. After a fight at the local bar, two young criminals must reconstruct the event in front of the investigator and the film crew. The investigator’s mistreatment of the two youngsters starts as a farce, but it soon turns into oppression, degradation and slowly moves towards a real tragedy.

At 11am at Teatro Miela there is also TSFF little ones, that organizes “Cine-Collage: Workshop For Little Directors“, a workshop that, with only a few simple tools, will help children invent the characters and the story for a film. Children will make a real story board to produce their own personal little film. The workshop, for children aged 6-13, is organized by Collettivo SuperAbile.

At 5pm for Art&Sound, the Italian premiere of Glasnije od oružja (Louder Than Guns) takes place in the presence of the director Miroslav Sikavica. In the late 1980s and early 1990s, popular music played an important role in the political changes in all former Yugoslavian countries; particularly in Croatia, where singers of both folk and rock bands have supported nationalist propaganda through the National Television. After 30 years, we meet the main actors of that era.

The association Varcare la frontiera organizes at 5pm at Teatro Miela “Sworn Virgins“, a talk about the Burrnesha, or “sworn virgins” – women who take a vow of chastity and renounce their femininity to enjoy freedom and independence. Mila Lazić talks with Jelka Vince Pallua, a Croatian ethnologist and author of the book Zagonetka virdžine – Etnološka i kulturnoantropološka studija (The Enigma of Sworn Virgins – An Ethnological and Cultural Anthropological Study), and Oneda Kabali, author of a Univerity thesis on Burrnesha, titled The Kanun, ethics and tradition. The Sworn Virgins, the Blood Revenge.

At 7pm, in the presence of the directors, there is the third and last tranche of screenings for the short film competition.

The last screening at Miela is at 9pm with Picturesque epochs: The Life of Mária Gánóczy Painter and Filmmaker, in the presence of the director Péter Forgács. The protagonist of Picturesque Epochs is Mária Gánóczy (born in 1927), a painter and a film aficionado who comes from a family of female artists. Gánóczy’s films and paintings immortalize the checkered history of Central Europe. Another masterpiece by Péter Forgács, mostly built on private archives.[:]