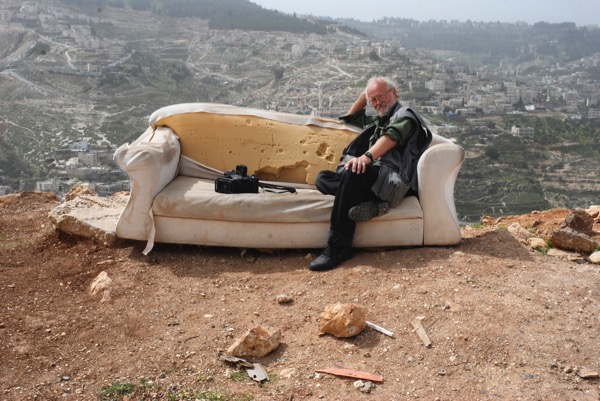 The great photographer will be presenting the documentary Koudelka Shooting Holy Land by Gilad Baram on 23rd January.

He is one of the greatest masters in the history of photography, witness to some of the 20th Century’s most important events: JOSEF KOUDELKA, the man who in 1968 allowed the world to see the Soviet invasion of Prague, will be at the 28th Trieste Film Festival on 23rd January to present the Italian première of the documentary Koudelka Shooting Holy Land by Gilad Baram.

In competition in the Art&Sound section, the film offers a close and unprecedented look at the creative process of the legendary Czech photographer, whom the director followed in his long journey through Israel and Palestine, from 2008 to 2012. Having grown up behind the Iron Curtain, in the shadow of the walls which used to divide Europe after the Second World War, Koudelka felt deeply shocked by the nine-metre-tall wall built by Israel in the West Bank, and therefore decided to pursue a four-year project in that area, which would once again make him confront the hard reality of violence and war, in a landscape punctuated by concrete walls and barbed wire which reveal the absurdity of the conflict.

The director, Gilad Baram, who was at the time working as Koudelka’s assistant, followed him on this journey through the Holy Land, from one visually stunning location to another. Each place, before becoming a “new photograph by Koudelka”, reveals a new scene and gradually introduces us to Koudelka’s modus operandi, and to how he perceives the world which he is photographing and the people he meets.

“Over almost thirty years – explain the directors of the Trieste Film Festival, Fabrizio Grosoli and Nicoletta Romeo – our Festival has welcomed many leading figures, great directors and international stars; yet we cannot hide the special emotion of welcoming Josef Koudelka, the ‘freest’ master of photography in the world, whose human gaze on the great historical events of the Twentieth Century made him one of its most incisive and significant interpreters. We are conscious of the exceptional opportunity we are offering the city of Trieste, and this is making us especially proud, also considering how rarely Mr Koudelka attends public events in his honour. We believe it is not by chance that Koudelka is visiting a border territory – marked by a tormented and emblematic past – at a time when his interest is focussing on the new walls which are again dividing peoples and countries.”

In 1968, just two days after his return from Romania, Koudelka photographed the Soviet invasion of Prague and the Czech non-violent resistance movement. His negatives, smuggled out of Prague, were published by Magnum in New York with the initials “P.P.” (Prague Photographer), in order to avoid repercussions against him and his family. For this work Koudelka received, anonymously, the 1969 Overseas Press Club’s Robert Capa Gold Medal.

Josef Koudelka was born in Boskovice, Moravia (Czech Republic) in 1938.
After graduating in engineering from Prague University in 1961, and while working as an aeronautical engineer in Prague and Bratislava, he began his career working as a photographer for some theatrical publications. He became a full-time photographer in 1967, with a reportage on gypsy life and culture in Romania, Slovakia and Western Europe.
In 1970 he left Czechoslovakia and received political asylum in Great Britain, where he lived for over ten years. In 1971 he joined Magnum, continuing to travel and work as a photographer all around Europe. In 1987 he became a French citizen and in 1991 he returned to Czechoslovakia for the first time in over twenty years.
In the course of his career he has been awarded numerous prizes, including: Prix Nadar, Grand Prix National de la Photographie, Grand Prix Cartier-Bresson, Hasselblad Foundation International Award in Photography.
His pictures have been exhibited in the most important museums in the world.

***
The section TriesteFF Art&Sound, presented in collaboration with Sky Arte (which will reward one of the films by acquiring it for future broadcast on its channel), is dedicated to documentaries which explore a wide and diverse range of artistic domains.

The Festival – directed by Fabrizio Grosoli and Nicoletta Romeo – is the first and most important Italian event dedicated to the cinema of Central and Eastern Europe. It was created in the years immediately preceding the fall of the Berlin Wall (the “zero” edition dates back to 1987), and for almost thirty years it has continued to act as a special signpost to the cinema of countries and directors which are often unfamiliar – or even unknown – to Italian, and, in general, Western audiences. More than a festival, it acts as a bridge connecting the cinema of Western and Eastern Europe, discovering names and trends destined for international success.