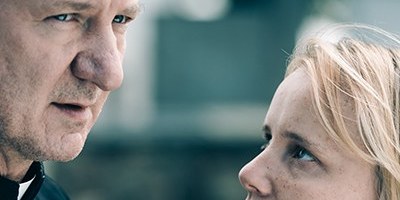 SATURDAY AT THE CINEMA!

THE FEATURE FILM CONTEST BEGINS AT POLITEAMA ROSSETTI WITH THE DELEGATION, THE BORDER FENCE, THE LOAD E THE INTERPRETER

Starting today and  during the whole week of festival, meeting with the festival guests at Caffè San Marco: everyday, at 11:00 am, audience and press will have the possibility to ask questions and interview directors, actors and producers atending the Festival.
At 12:00 will take place the presentation of the book “Volevo uccidere J. L. Godard” by Jan Nemec. 31 episodes telling the story of the Czech directors’ dissolute life during most of the 20th century, between cinema, censored jazz, beautiful women, the 68’Cannes festival missed “because of Godard” and an unsuccessful american exile. An uncomfortable, visionary, sarcastic and self-deprecating character, never obliging to the Power, often laughed at and grotesquely deformed.

The screening day begins at 10:30 at Politeama Rossetti with Kobold by Max Sacker and Ioulia Isserlis (D, 2018, col., 20’), a whole new kind of horror experience that blurs the boundaries between cinema and VR game: get in the shoes of a urban explorer investigating on the homicide of a missing boy. The author will attend the screening.
For the section  ‘Tales from the Berlin Wall’, at 11:00 will be screened Rabbit À La Berlin by Bartek Konopka (PL-D, 2009, col. & b-w, 39’); presented in more than 70 international festivals, nominated at the Oscars for Best Documentary Feature, the documentary was presented in competition at the 2010 Trieste Film Festival.
Following, Totò e Peppino divisi a Berlino by Giorgio Bianchi (I, 1962, b-w, 95’), presented one year after the construction of the Berlin wall. The scenes of the Wall and the Brandenburg Gate were shot at the hippodrome Tor di Valle in Rome.
For the feature film competition, at 14:00 The Delegation (Delegacioni) by Bujar Alimani (AL-F-GR-RKS, 2018, col., 76’), Grand Prix winner at the latest Warsaw International Film Festival. The author will attend the screening.
At 15:45, The Border Fence (Die Bauliche Massnahme) by Nikolaus Geyrhalter (A, 2018, col., 112’) talks about the reactions of the people living on the Brenner Pass, when in 2016 the Austrian government announces the construction of a border fence, expecting a shift of the refugee routes to Italy after the Balkan route is closed.
At 18:00  will be the time for The Load (Teret) by Ognjen Glanović (SRB-F-HR-IR-Q, 2018, col., 98’),  set in 1999 in Serbia. Vlada works as a truck driver during the NATO bombing of Serbia in 1999. The author will attend the screening.
Following the screening, the presentation of the CEI AWARD.
At 20:00 it is time for The Interpreter (Tlumočník) by Martin Šulik (SK-CZ-A, 2018, col., 113’): 80-year-old interpreter Ali Ungár travels to Vienna in search of the former Nazi officer who might have executed his parents. He finds only his son who has distanced himself from his father’s past. But Ali’s visit awakens their past, and the two men take off on a journey across Slovakia in search of surviving witnesses of the wartime tragedy.
Ending the programme at 22:15, the special event Clergy (Kler) by Wojtek Smarzowski (SK-CZ-A, 2018, col., 113’), which provides an unusual view of the Catholic Church, shedding light onto uncomfortable and difficult topics.  The film won the Audience Award at the Polish Film Festival in Gdynia and was the biggest success at the Polish box office in 2018.
At the Cinema Ambasciatori the programme starts at 11:00 with the documentary out of competition, La città che cura by Erika Rossi (I, 2018, col., 89’), facing the topic of access to healthcare and its  inequalities. The author  will attend the screening

Today begins also the walks. Meeting at 10:30 for A Walk Through Multicultural Trieste by Marzia Arzon, starting from Campo S. Giacomo to discover the meeting points of the city.
Starting at 12:00 from the Casa del Cinema, the walk Porto Vecchio and Cinema, by Elisa Grando, with a special itinerary dedicated to one of the most fascinating locations of Trieste.
Trieste Film Festival is also special events for the little ones: at 11:00 there’s the special workshop Inside the camera obscura, by La Poltrona Viola. A workshop to discover the secrets of the ‘camera obscura’, one of the first devices to reproduce images.
The next appointment is at 15:30 and 17:30 at the Pop Up Space, with the workshop The magic of early cinema by  Annalisa Metus: a journey back in time to discover the magic of theatres, shadow puppets and simple paper toys.
In occasion of the VR DAY, at 15:30 Kobold VR & In The Cave: Case Study on two works in VR made in strong connection with traditional cinema. We will meet the creators to understand the creative stage, the evolution and completion of their projects. Kobold was premiered in competition at the Venice VR and In The Cave was developed during the Biennale College VR.
At Politeama Rossetti meeting at 17:00 with Ingrid Hunkeler, one of the first to invest in the VR space. From great expectations to disillusions, stories of success and failure to the young history of VR.
Everyday starting today until Tuesday, January 22, from 11:00 to 20:00, In the Cave by Ivan Gergolet (I, 2018, col., 15’) and Kobold by Max Sacker and Ioulia Isserlis (D, 2018, col., 20’).
At 17:30 will be the time for the event The artist and the cinema industry – Legal protection, funding and other key issues at Caffè Rossetti: the objective is to analyze the major issues through the interaction between speakers and participants, trying to identify practical solutions to the issues.
At 19:00, at Cavò, the opening of the photographic exhibition How far now? by Niccolò Hébel, and Ilaria Crosta. A project in partnership with ICS – Consorzio Italiano di Solidarietà and associazione Andandes of Trieste.
Closing the day at Aqvedotto Caffè at 22:30, the event Berlin Wall of Sound – Jazza DjSet. Techno’s arrival in Europe from Detroit coincided with the fall of the Berlin Wall in 1989. The euphoria of this event gave space to non-stop parties and techno became the soundtrack for the reunification of the German capital. Jazza’s dj set is a homage to Berlin’s electronic sound from Basic Channel to Tresor, from Villalobos to Kalkbrenner, from Moderat to Innervisions.[:]