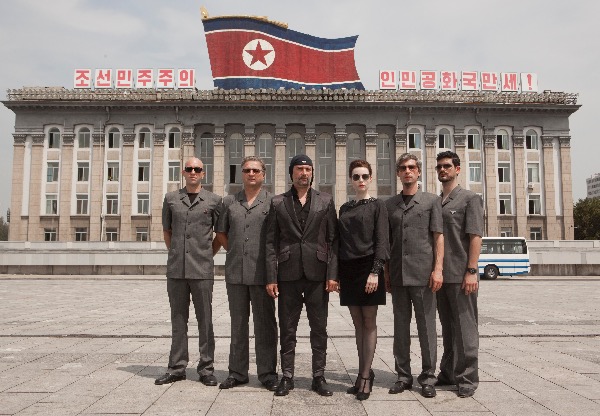 sunday at the cinema!

BABYLON SISTERS, SHOT IN TRIESTE, IS THE PROTAGONIST OF THE CINEBRUNCH AT SALA TRIPCOVICH

IN THE LONG FEATURE FILM COMPETITION MISTER UNIVERSO AND IT’S NOT THE TIME OF MY LIFE,THEN THE TRIBUTE TO VITALIJ MANSKIJ WITH CLOSE RELATIONS, WHILE IN THE DOCUMENTARY COMPETITION THERE’S MY OWN PRIVATE WAR AND ZOOLOGY IN “GENRE SURPRISES”

At 11:00 at the Spazio Trieste Film Festival Magazzino delle Idee the panel “Distribuzione Italiana 2.0” will be held, in collaboration with the Sindacato Nazionale Critici Cinematografici Italiani and coordinated by Franco Montini. This will be a chance to discuss the new models of distribution of high quality cinema.
At the same time at Sala Tripcovich Babylon Sisters will be shown, a film by Gigi Roccati not in competition. The film was entirely shot in Trieste and is a contemporary fairy tale that celebrates the strength and the beauty of multiculturality in music. The author an cast will be attending the screening. At the end of the film the public will be offered a brunch in the foyer of Sala Tripcovich to enjoy ethnic cuisine sweet and savory delicacies.
At 14:30 the documentary competition presents My Own Private War by Lidija Zelović, a film about the memories on the Bosnian War from a personal viewpoint about what truly happens when a collective trauma strikes a family. The author will be attending the screening.
At 16:00 as part of the feature film competition, Mister Universo will be shown. The film by Tizza Covi and Rainer Frimmel is a tasteful journey to the heart of the unknown circus communities in Italy. The authors will be attending the screening.
At 18:15 the genre surprises section presents Zoology (Zoologiya) by Ival I. Tverdovskij. The protagonist is Nataša, a middle-aged woman who works at a zoo. She is stuck in a routine and it seems that life holds no surprises for her, until one day… she grows a tail and everything changes all of a sudden.
At 20:00 the tribute to Vitalij Manskij presents the latest masterpiece of the director: Close Relations (Rodnye), a film about the search for his family and the exodus through Ukraine, about identity, nationalisms and the reasons behind a war. The author will be attending the showing.
At 22:15 at Sala Tripcovich the projection of It’s Not The Time Of My Life (Ernelláek Farkaséknál) by Szabolcs Hajdu will close the day off. The film won the last Karlovy Vary film festival and was shot with the collaboration of 13 cinema students of the director himself. It is the story of an unexpected visit that will challenge the resilience and the patience of two related families. The author will be attending the showing.

At 14:00 at Teatro Miela the feature film out of competition Comedy Of Tears (Komedija Solz) by Marko Sosič. The film was entirely shot in Trieste and is about the complicated relationship between an old man and his nurse, marked by the sorrow of memories and racism. The author will be attending the showing.
At 16:00 the Corso Salani Award presents Un Altro Me by Claudio Casazza, a documentary film that tells the story of 12 months spent with inmates convicted for sexual offences and criminologist Paolo Giulini’s team. It is a road to understanding, redefining and changing the meaning of one’s own experience and existence. The author will be attending the showing.
Right afterwards, the same section projects Sette Giorni by Rolando Colla, the story of Ivan and Chiara and the forbidden passion they share for seven on a Sicilian island, with an imminent wedding to organize. The author will be attending the showing.
At 20:00 the short firm competition is scheduled, and at 22:00 the section Art&Sound presents Liberation Day by Ugis Molte and Morten Traavik, a documentary film about Laibach’s journey and concert in North Corea. This former Yugoslavia’s cult band was the first rock band to perform in North Corea. The film is introduced by Slavoj Žižek. The authors will be attending the showing.

Among the other important appointments of the day, we would like to draw attention to the Vitalij Manskij Masterclass, which will be held at 18:00 at the Magazzino delle Idee. The meeting has free entrance.
More free-entrance events will be held at the Immaginario Scientifico: Kaleido Special TSFF at 10:00 and at 18:00 with projections of selected short films from the Trieste Film Festival on screens in the suggestive environment of the museum; Family Workshop, making cinema accessible, where grown-ups and children (8 years old and older) will get involved together to discover how cinema works.

At 11:00 starting from Casa del Cinema the first of the scheduled EsternoGiorno walks will take place: Marzia Arzon will take the participants into the multiculturality of Trieste with a visit to the Jewish cemetery and to the Synagogue.
From 12:00 to 17:00 the project MarePlurale will continue on Molo Audace.