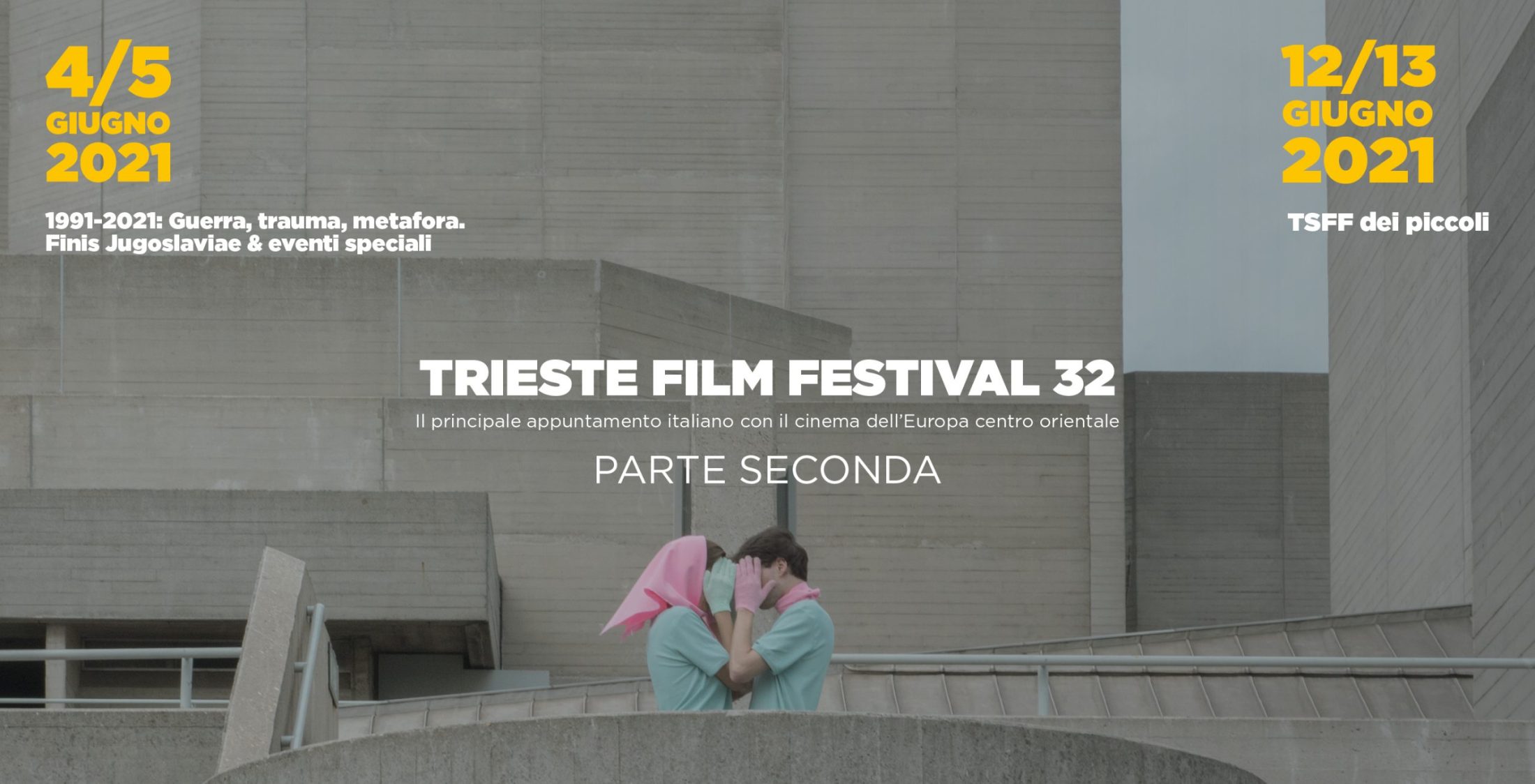 The 32nd Trieste Film Festival is back with a programme of theatrical screenings at the Teatro Miela. The Festival, directed by Fabrizio Grosoli and Nicoletta Romeo, took place online in January due to Covid-19 restrictions. It had, however, always intended to show part of its programme as a live in-person event when circumstances would allow. This has also been dictated by the fact that most entries in this year’s selection are on actual film, therefore needing to be physically screened.

Over two weekends the programme will celebrate two great auteurs who have recently passed away; it will focus on Balkan cinema thirty years since the collapse of the Yugoslav Federation; and will include the “TSFF dei Piccoli”, a section dedicated to younger audiences.

Artistic directors Fabrizio Grosoli and Nicoletta Romeo said: «After the great success of the online edition of the Trieste Film Festival in January, we are delighted to be back with a series of special cinema screenings and the “TSFF dei Piccoli” section – a programme dedicated to young people that over the years has proved especially popular. We see this as a positive sign of hope for the world of cinema and showbusiness in general».

Since its inception, the Festival’s mission has been to promote the cinema of Central and Eastern Europe in Italy and to mark, through cinema, the most important historic events that have been taking place in these regions of the old continent – for example with recent editions dedicated to the Fall of the Berlin Wall and German Reunification.

On 4 June the Festival remembers two filmmakers who have recently died. OSTRE SLEDOVANÉ VLAKY by Jiří Menzel (Closely Watched Trains, CS, 1966, b&w, 89’, original Czech version with Italian subtitles) will be shown as a special event. The film, which won an Academy Award for Best Foreign film in 1967, is based on the short story by Bohumil Hrabal and represents one of the most important works of the so-called Czechoslovak Nová vlna (new wave), juxtaposing the grotesque and the tragic. Another special screening will be dedicated to SAN ZIMSKE NOĆI by Goran Paskaljević (Midwinter Night’s Dream, SRB, 2004, col., 95’, original Serbian version with Italian subtitles). The film, awarded a Special Jury Prize at San Sebastian in 2004 and a Special Jury Prize at the Trieste Film Festival in 2005, deals with the collapse of Yugoslavia and the special bonds that arise among people at the margins of society, people pitted against each other by war, yet forced to live together under the same roof.

In the context of the thirtieth anniversary of the outbreak of the Balkan Wars, which was already marked in January, on 4 and 5 June we continue this focus with some interesting and original works from the last thirty years. 1991-2021: GUERRA, TRAUMA, METAFORA. FINIS JUGOSLAVIAE (1991-2021: War, Trauma, Metaphor. Finis Jugoslaviae) will feature MGM SARAJEVO (Ćovjek-Bog-Monstrum) by the SaGA collective (Ismet Arnautalić, Mirsad Idrizović, Ademir Kenović, and Pjer Žalica, BIH, 1992-1994, col., 93’, original Bosnian version with Italian subtitles). The work took two years to complete and presents a snapshot of three stories all based in the city of Sarajevo: the main characters talk about the very heart of the city under siege, suffering from the restrictions imposed by the war. MARBLE ASS by Želimir Žilnik (YU, 1995, col., 87’, original Serbian version with Italian subtitles) is one of the most unusual films to have come from Europe in the 20th Century. Marble Ass is a brave political and social drama with a positive transgender message that supports individual creativity against the macho world of the military. The film takes place in a derelict flat on the outskirts of Belgrade, and centres on Merlyn, a prostitute, and her room-mate and colleague Sanela. Their routine is shattered when Johnny, a former lover gone crazy, is demobbed from the army and returns home full of barely repressed anger. The film received a Teddy Award from the Berlin Film Festival in 1995. At the Teatro Miela we shall also screen the great ‘90s Croatian success KAKO JE POČEO RAT NA MOM OTOKU by Vinko Brešan (How the War Started on My Island, HR, 1996, col., 97’, original Croatian version with Italian subtitles). The film takes us back to 1991, when the Yugoslav national army, not acknowledging Croatia’s independence, holds on to all the country’s military barracks and Blaž Gajski goes to a Croatian island to take his son back home, who is in one of these very barracks. This was Vinko Brešan’s debut, the “king of black comedy”, written with his father Ivo, famous Croatian author and screenplay writer. Despite being originally intended as a TV movie, it became the most popular Croatian film of the 1990s. The last film in this section will be DRŽAVA MRTVIH by Živojin Pavlović and Dinko Tucaković (The State of the Dead, YU, 1998-2000, col., 101′, original Serbian version with Italian subtitles). The story takes place in the ‘90s in Yugoslavia, where Slovenian Major Janez Kranjc, who has been loyal to the Yugoslavian cause all his life, moves to Belgrade with his Macedonian wife, 10-year-old twin daughters and his 20-year-old son, despite the Slovenes offering him a higher military rank to entice him stay. However, Janez will come to realise that in Belgrade he is just another foreigner in what he believed was still his country.

The Balkan Wars anniversary is also marked by an exhibition organised by Massimo Premuda that can be viewed until 13 June at DoubleRoom in Via Canova 9 and features the 1991 photographic reportage by Giovanni Montenero FINIS JUGOSLAVIAE. The exhibition retraces, thirty years on, the days of the short 1991 armed conflict, the so-called “10-day war” that followed the declaration of independence by the Republic of Slovenia. Pictures in colour and black and white by photographer Giovanni Montenero recorded the conflict’s harshest moments, as well as the daily lives of the soldiers who were based at the Pesek and Rabuiese border crossings at the gates of Trieste.

The Festival’s second weekend will be entirely dedicated to our younger viewers with the TSFF dei Piccoli: screenings, shows, workshops and walks dedicated to the younger generations.

On Saturday 12 June they will be able to watch great classics such as SNEŽNAJA KOROLEVA (The Snow Queen) by Lev Atamanov (USSR, 1957, colour, 63’, dubbed in Italian), a Soviet animation film about the adventurous story of Gerda and Kaj. The plot is an adaptation of the famous Hans Christian Andersen fairytale, and is similar in subject matter to Disney’s Frozen, that was also freely inspired by the same story. Thanks to the valuable collaboration with Ljubljana’s Animateka – International Animation Film Festival – the TSFF dei Piccoli is delighted to present IL MEGLIO DI ANIMATEKA – CORTI DI ANIMAZIONE PER BAMBINI (The Best of Animateka – Children’s Short Animated Films): 8 of the best animation shorts recently produced in Central and Eastern Europe. As well as I CLASSICI SLOVENI DELL’ANIMAZIONE CON PUPAZZI (Slovenian Puppet Animation Classics) – a retrospective of 35mm films suitable for all ages that pays tribute to all the pioneers of Slovenian animation cinema.

On Sunday 13 June the “Schermi e Lavagne” education project by the Cineteca di Bologna has organised the PICCOLE CANAGLIE (Little Rascals) selection – a programme of animation shorts made in European countries which belonged to the former Soviet bloc between the late ‘50s and the ‘70s, as well as FIABE IN FILA (Fairytales parade), a programme of shorts dedicated to fairytales and popular legends. These will range from the timeless masterpieces of Italian animators such as Giulio Gianini, Lele Luzzati and Osvaldo Cavandoli, to incursions into contemporary animation with the films Le nozze di Pollicino (Hop-o’-My-Thumb’s Wedding).

TSFF dei Piccoli encourages creativity, and in the story-telling workshop COSA STAI TRAMANDO? (What are you plotting?) organised by Costanza Grassi on Saturday 12 June it will be the kids themselves who will invent a story for a film (bookings are mandatory – please contact prenotazionitsff@gmail.com).

On Sunday 13 June renowned actress Lara Komar will present STORIA DI UNA STELLA MARINA/ZGODBA O MORSKI ZVEZDI (Story of a Starfish). The show (produced by Trieste’s Casa della Musica/Scuola di Musica55) will be performed both in Italian and Slovene with a huge pop-up book in the middle of the stage, a narrator and two musicians. This will be a fairytale to delight both eyes and ears.

Two further events conclude the programme: the first, on Saturday 12, is the walk DA PROSECCO A MIRAMARE (From Prosecco to Miramare) – a journey in search of the Karst’s flowers and herbs, their colours and scents, which will be accompanied by tales about the local inhabitants. The itinerary will start in Prosecco and will end in Miramare, in the fairytale castle perched above the sea and its park full of flowers and trees – a reminder of Maximilian of Hapsburg’s journeys. The second event, on Sunday 13, is a marvellous treasure hunt – the CACCIA AL TESORO NEL PARCO PIÙ APERTO CHE C’È (Treasure Hunt in the City’s Most Welcoming Park) inside the Parco di San Giovanni, among roses, horses, and trees. This will be a playful opportunity to discover the beauty and surprises of the city’s most accessible and inclusive park (bookings are mandatory for both events – please contact prenotazionitsff@gmail.com).

In case tickets sell out, you can JOIN THE TSFF DEI PICCOLI ONLINE!

Capacity is limited due to Covid-19 restrictions and in case you were not able to book a seat, you can watch the shorts from the comfort of your home throughout the weekend of 12 and 13 June on www.cinetecadimilano.it.

TSFF dei Piccoli will also include the presentation of the second edition of the EU CIAK education project. How and to what extent does technology influence our lives? This theme will be explored by four classes of Trieste’s Istituto Professionale S. De Sandrinelli high school. Students will present the shorts which they created during their workshops and the public in the cinema will choose the best film. The project is supported by the Fondazione Pietro Pittini.

Access to Teatro Miela will involve and be dependent on adhering to all necessary Covid-19 protocols and requirements.