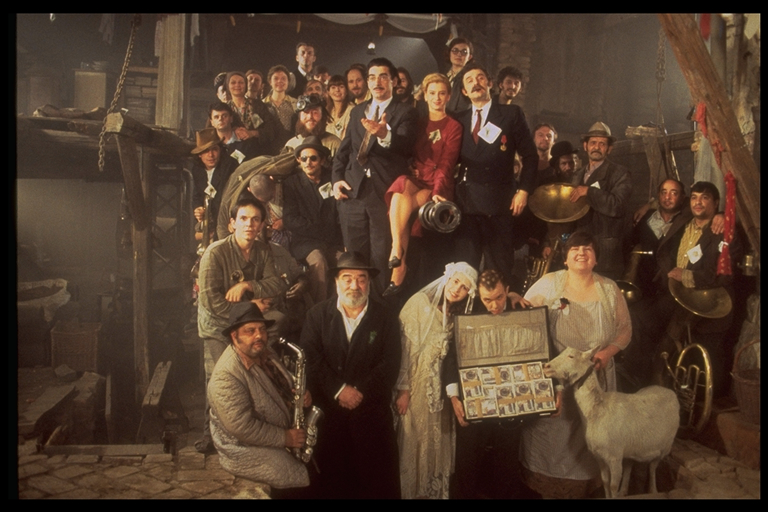 19:30 THE OPENING CEREMONY OF THE TRIESTE FILM FESTIVAL

The first day of the Trieste Film Festival is particularly packed with events. Even though it’s not yet competition day, our schedule is full of many special events and extras.

At 13:00 the Casa del Cinema Trieste project “ESTERNO/GIORNO” presents a virtual journey through the cinema region: if getting around is complicated, then set off on the Grand Tour of Friuli Venezia Giulia’s locations with the mini doc ‘sì viaggiare’, where you will find stations, trains, tracks, level crossings, international stars and unforgettable films.

Following this, the day continues with a special screening at 14:00 of a film already seen in competition at the last Venice Film Festival: SƏPƏLƏNMİŞ ÖLÜMLƏR ARASINDA (In Between Dying) by Hilal Baydarov, AZ – MEX – USA, 2020, col., 88’ Azerbaijani o.v., eng. subt. The film tells the story of Davud, a young man trying to find his real family, who completes his life cycle in the span of a single day. When he does find love, it is in the place where he has always lived, but it is too late. A harsh yet poetic reflection on love, life, death and time. The fictional debut of one of Azerbaijan’s most prolific documentary filmmakers, in competition at the last Venice Film Festival.

The Art&Sound section at 15:30 instead introduces an Italian preview of PARIS CALLIGRAMMES by Ulrike Ottinger, D – F, 2019, col. & b-w, 130’ German – French – English o.v., eng. subt. The film combines the German filmmaker and artist Ulrike Ottinger’s personal memories of 1960s Paris with a portrait of the city and a social map of the time. Through archive footage and sequences from her earlier works, Paris Calligrammes is a fascinating journey into the golden age of 20th century culture.

At 17:45, Art&Sound also presents LE REGARD DE CHARLES (Aznavour by Charles) by Marc di Domenico, Charles Aznavour, F, 2019, col. & b-w, 83’ French o.v., eng. subt. In 1948, Édith Piaf gave Charles Aznavour his first film camera. Until 1982, Charles collected hours of footage that formed the extraordinary corpus of a filmed diary. A few months before his disappearance, he and Marc di Domenico began to look through his films. The result is a unique film built on the images and words of the great Franco-Armenian singer.

The OPENING CEREMONY will take place at 19:30 and will be followed at 20:15 by the opening film UNDERGROUND by Emir Kusturica, YU – F – D – H – BG – CZ, 1995, col., 178’ Serbo–Croatian – German o.v., eng. subt. TSFF will officially inaugurate its 32nd edition with a special event: an epic story of friendship which portrays the history of Yugoslavia from the beginning of World War II until the onset of the Yugoslav wars. A masterpiece by Kusturica and winner of the Palme d’Or at Cannes in 1995, this film is a symbol of the dissolution of a country that is no more.

The first day comes to a close at 23:15 with another Italian preview and the 2021 Art&Sound Award: SLUČAJNA RASKOŠ PROZIRNOG VODENOG REBUSA (Accidental Luxuriance of the Translucent Watery Rebus) by Dalibor Barić, HR, 2020, col., 80’ Croatian o.v., eng. subt. An animated film from a truly unique artist. Made in a completely artisanal way through an intoxicating visual collage, the film recalls all styles of the 20th century avant-garde, with a mystery and noir plot.

In recent years, Sunday brunch has become a real part of Festival Sunday, with the unmissable event selling out every year. Don’t miss our CINEBRUNCH to be enjoyed from home this year on Sunday the 24th of January, once again in collaboration with the historic Caffé San Marco. Make your reservation, pick up your box and enjoy a freshly prepared brunch from the comfort of your own sofa. Brunch reservations are open until Friday the 22nd of January at 040 0641724 (via telephone and whatsapp) info@caffesanmarco.com

PrevPrecedenteON SUNDAY JANUARY 24TH THE CINEBRUNCH IS BACK: BOOK YOUR BOX!
Successivo#TSFF32: DAY 2Next
SUBSCRIBE TO THE NEWSLETTER