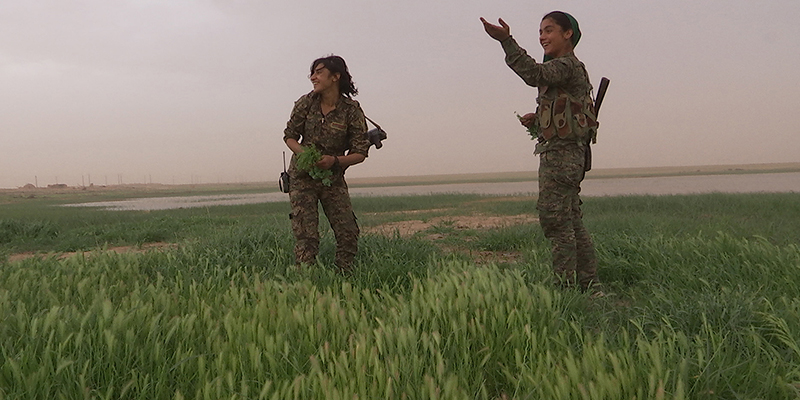 At Politeama Rossetti the screenings start at 3:30pm. The first film of the day, in the documentary category, is Ouăle Lui Tarzan (Tarzan’s Testicles) by Alexandru Solomon. Sukhumi is the capital of Abkhazia, a tiny republic on the shores of the Black Sea, once part of Georgia. On its highest hill there is a medical research institute established by the Soviets in the 1920’s that conducts experiments on monkeys. The legend goes it was meant to create a hybrid between a man and an ape. This creature never came to life, nor did the communist New Man. Film screening in the presence of the director.

At 6pm, a special event at Politeama Rossetti: the Hungarian director of the moment, Kornél Mundruczó, is in Trieste to present his latest film, Jupiter Holdja (Jupiter’s Moon). In a world where miracles can be bought for a few cents, a young illegal immigrant becomes subjugated by his power to fly. A cautionary thriller about disillusionment and faith, a satire on anti-refugee paranoia, a religious parable of guilt and redemption, from the director of the award-winning White God. It premiered in Cannes 2017.

At 8:15pm the first screening of the feature film competition: Breaking News by Iulia Ruginã. After the tragic death of his cameraman, the reporter Alex Mazilu has to make an in-memoriam reportage covering his life. Three days before Christmas, in a small town on the Black Sea coast, Alex puts together the puzzle pieces of this man’s life, seen through the eyes of his troubled 15-year-old daughter. Special Jury Mention for Best Newcomer to Voica Oltean at Karlovy Vary. Film screening in the presence of the director.

The last screening of the day at Politeama Rossetti is another special event: the latest movie by Sergej Loznica, the renowned author of In the Fog(TSFF 2013 Best Film). Inspired by a Dostoyevsky’s short story, in Krotkaja (A Gentle Creature) the director takes us into a land of crime without punishment, a journey into the abyss. It premiered in Cannes 2017.

At Teatro Miela the day is fully dedicated to Made in Kurdistan. The first screening at 3pm is Meteorlar (Meteors) by Gürcan Keltek. In a Kurdish village in Turkey, a mysterious noise makes all the inhabitants step out of their homes. Shortly after, the city is on lockdown: an eclipse appears out of nowhere and meteors start falling. Blending documentary filmmaking and political commentary, Meteors is a film about memory and disappearance of people, places and things.

At 4:30pm the Italian premiere of Gözyaşina Yer Yok (No Place for Tears) by Reyan Tuvi. A journey of solidarity, life and death which starts from the small border village of Maheser, Turkey, and reaches the city of Kobane, Syria, devastated by the war. While the village is hoping for the liberation of the city, their children, families and friends are fighting for their land, their independence and their identity.

Can a nation whose international recognition is still controversial have an identity in cinema? This hot and present topic is debated at 6pm inBetween Memories And The Present, A Possible Identity For Kurdish Cinema. The guests are the directors Gürcan Keltek and Reyan Tuvi, the poet Hevi Dilara and the journalist Giuseppe Acconcia. The debate is mediated by Giuseppe Gariazzo.

Following the debate, at 7:30pm, the film A Flag Without a Country by Bahman Ghobadi. Between fiction and documentary, it tells the stories of Helly Luv and Nariman from Iraqi Kurdistan. Helly Luv is a Kurdish Iranian pop-singer and Nariman is a pilot; they both aspire to be a source of strength to their society perpetually in struggle with harsh life conditions, war and Isis attacks.

The last Made in Kurdistan screening is Filles du Feu (Fire’s Daughters) by Stéphane Breton at 9:15pm. Hunted down by fierce enemies of Isis, Syrian Kurds rose up. Women took up arms just like men. The filmmaker followed them very closely for many months and created this unique war movie with no war.

From 4:30pm to 7:30pm, the second appointment with TSFF Factory: the Ridotto space of the Teatro Miela is transformed into a print shop to host a creative workshop where, in an atmosphere of “permanent assembly”, the public will be invited to create their own revolutionary posters, starting from the reworking of period materials. The workshop is run by Daria Tommasi.[:]